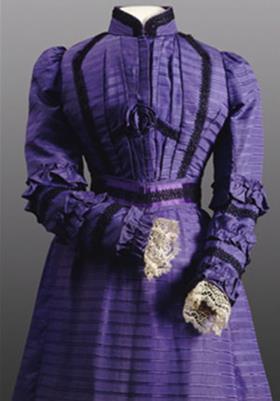 A chemical analysis of the purple threads from silk dresses dating back to the 19th century has shed new light on the early trade and manufacture of synthetic dyes. One dress was found to be coloured with a dye that was invented just four years earlier, showing that at the time the clothing industry adopted new technology quickly.

‘This analysis reveals important information for conservators and curators of fashion, raising interesting observations and questions,’ says Jeffrey Church, a molecular spectroscopist at the Commonwealth Scientific and Industrial Research Organisation (CSIRO) in Australia who worked on the study with colleagues from the National Gallery of Victoria, where the dresses form part of the collections.

After taking small samples from each dress, the researchers separated and analysed the dyes and mordants, which are used to bind the dyes to the material, using various techniques, including thin layer chromatography, surface enhanced Raman spectroscopy and energy dispersive x-ray spectroscopy. ‘All of the techniques used in this work enable analysis to be carried out on less than 2mg of material,’ says Church, ‘which is very important when working with samples of historical significance.’

The dye used on three of the dresses – all of which were originally made in England – was identified as methyl violet, which was first synthesised in 1861. The earliest of these dresses dates to 1865. ‘[This] suggests that the new synthetic dyes were embraced quite rapidly by the textile dye trade and the fashion world of the day,’ says Church.

Discovered in 1856, mauveines (top row) were the earliest synthetic purple dyes. They were replaced by

The dye in the fourth dress, a wedding dress made in Australia around 1885, was identified as Perkin’s mauve, the first synthetic purple dye. This dye was only produced for 10 years starting in 1859, so its presence in a dress that was made decades later is curious, Church says. ‘Does the presence of Perkin’s mauve relate to trade delays between Europe and Australia? Or was this precious fabric woven decades earlier and kept for the special purpose of a wedding?’ To find the answers, he adds, further work would need to be carried out to track the dress and its fabric back in time.

John Lombardi, a chemist from the City College of New York in the US who develops techniques for analysing historical dyes, says that work like this can provide a useful starting point for museum professionals investigating a particular artefact’s provenance and history. This particular study, he explains, builds on work he and colleagues carried out recently to characterise early purple dyes using spectroscopy. ‘I was very pleased to read the article and see somebody had used these things in a practical way,’ he says. ‘It’s brought up a mystery, but it’s a very interesting story.’

Marco Leona, chief scientist at the Metropolitan Museum of Art, US, says: ‘The global trade of colorants is a constant of economic history. It used to go from south to north and from the tropics (east and west) to Europe, but the rise of synthetic organic chemistry inverted that trend.’

‘Mauve had a very short commercial life as a textile dye, and it is indeed surprising to see it in a dress made quite a bit later than its heydays. One cannot, however, generalise from one isolated finding, [which is] why it is important to carry out this work.’