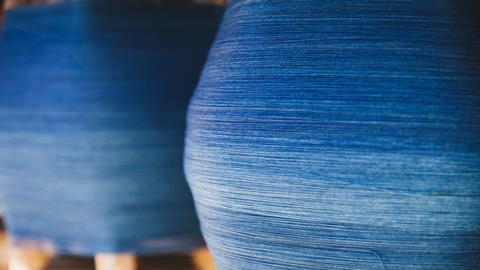 In ancient times fabric dyers were often banished to the edge of town because their vats were so noxious and smelly. Modern dyeing too is not generally the cleanest and greenest of chemical technologies. But the process of dyeing with the traditional colorant indigo, still used for making blue denim, could become more environmentally friendly thanks to a neat bit of bioengineering by a US team at the University of California at Berkeley.1

Until the late 19th century, indigo was extracted from plants such as the Indian bean plant Indigofera tinctoria. It was first synthesised chemically in 1877, after which indigo cultivation collapsed. Today indigo is made chemically, starting with aniline, but ‘the current chemical process is environmentally hazardous’, the Berkeley team leader John Dueber says. That’s why in the 1990s the biotech companies Amgen and Genencor developed methods for making the dye by fermentation of microorganisms genetically modified to contain genes from indigo-producing plants.2

That latter approach, which is still not commercially viable, could potentially be ‘greener’ than chemical synthesis. Instead of using a feedstock of toxic aromatic molecules in organic solvents, the microbes can use a harmless raw ingredient such as the amino acid tryptophan.

There’s still a problem though. The microbes produce the indigo precursor indoxyl, which is spontaneously oxidised to indigo by air. But indigo itself is insoluble, and so to use it for dyeing it needs to be converted to a derivative called leucoindigo, which is water-soluble. This requires a reducing agent, for which sodium dithionite is generally used. Dyeing with chemically synthesised indigo demands this step too.

Sodium dithionite is not an ideal reagent, because it gets converted to sulfate and sulfite, which Dueber says are ‘harmful to marine life if dumped in rivers, and corrosive to piping if handled in a wastewater treatment facility’. That’s why he and his colleagues set out to modify the fermentation process to eliminate the reduction step. 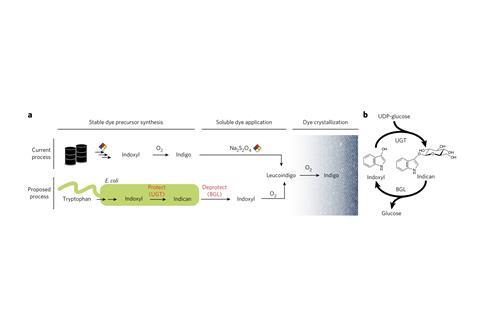 Their strategy involves tooling up the microbes to produce not indoxyl but the soluble indigo precursor indican, which can then be transformed to indigo in situ on the fabric fibres. Indican is a derivative of indoxyl, which sports a protecting group, the sugar glucose, which makes it stable in air.

To make it, the researchers gave their indoxyl-making microbes – E. coli with indigo-synthesising genes – an additional gene from the Japanese indigo plant Persicaria tinctorium that encodes an enzyme for attaching sugars, called glucosyltransferase. The P. tinctorium plant itself has such an enzyme because it too uses the protecting-group strategy in making indigo. Dueber’s team extracted and purified the protein and then characterised it to figure out the sequence of the gene encoding it.

They then added this gene to their engineered E. coli so that the bacteria glucosylated indoxyl to produce indican. To convert this to indigo, the glucose group must be lopped off, which can be carried out by a β-glucosidase enzyme. The Berkeley group made this enzyme from a different bioengineered strain of E. coli, containing a glucosidase gene from another bacterium. ‘Once this glucose group is removed, the resultant indoxyl molecule is highly reactive in air and will oxidise into indigo crystals,’ Dueber explains.

To dye white denim cloth, the researchers sprayed it with indican solution and then dipped it into a solution of the glucosidase enzyme. After removal of glucose transforms indican to indoxyl, it then spontaneously oxidises to indigo, which then sticks to the fibres. The resulting cloth wasn’t as deep blue as that made by the conventional process because, Dueber says, it was made at a pH of around 7.5, whereas the usual dyeing step is done at a higher pH at which indigo sticks better. But a deeper shade could be produced by repeated rounds of dyeing, and the colour is retained after washing. 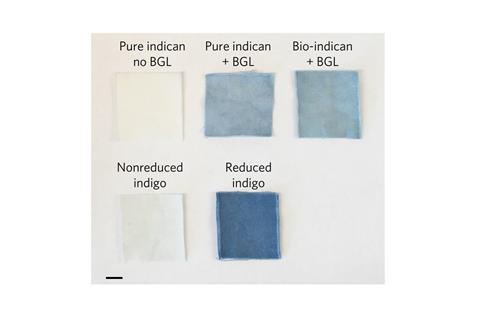 ‘The use of the glucose group for reduction of indoxyl is very important for the environmental friendliness,’ says Si Wouk Kim of Chosun University in South Korea, who has also worked on microbial production of indigo.

The current scheme is too costly for industrial production, but Dueber hopes to find ways of making it cheaper. One of the key costs is the glucosidase enzyme. ‘This class of enzyme is already mass produced from filamentous fungi, so we are hopeful we could use such a system for producing a highly active glucosidase at low cost,’ Dueber says. Kim adds that tryptophan is a relatively expensive feedstock too, but Dueber says they hope eventually to engineer microbes that can use glucose instead. Although the bioproduced indigo dye will probably be more expensive than the chemically synthesised one, he says ‘we aim to ultimately make it competitive’.

The general strategy of making a water-soluble protected form of the target molecule should be more widely applicable, the researchers say. ‘We have recently used glucosylation to bioproduce the beet violet dye betanin [in yeast],’ says Dueber.3 Here too the glucose group stabilises the dye and removes the need for a reducing agent.