Researchers have provided further glimpses into the origin of life by showing how precursor nucleotide molecules could have self-polymerised without enzymes and subsequently given rise to the catalytic activity of the simplest, most ancient forms of RNA.

The idea that life on Earth descended from primitive self-replicating RNA molecules is widely accepted.  But parts of the ‘RNA world’ picture have stumped scientists, including how the first nucleotides linked themselves into short chains without the catalytic activity of enzymes, and  how these short sequences subsequently developed the catalytic function required to produce longer strands of RNA and eventually complex life.

Now, groups led by Judit Sponer at Masaryk University in the Czech Republic and Ernesto Di Mauro at Italy’s Institute of Molecular Biology and Pathology have proposed solutions to both problems in two separate studies. To explain the first conundrum, they fully characterised the polymerisation reaction of cyclic guanosine monophosphate (GMP) – a nucleotide present in RNA. 1

Experiments revealed that transphosphorylation drove non-enzymatic self-polymerisation of stacked cyclic GMP to lengths of 18 units in solution as well as under dehydrating conditions, which offers a plausible route for the synthesis of ancient RNA without enzymes. They suggest that a gradually desiccating environment such as a drying lagoon could induce this polymerisation.

‘We report the only known polymerisation method so far which is plausible in a prebiotic context and selectively leads to 3’,5’-linked oligomers,’ says Sponer. This linkage is important because it is the phosphodiester bond – which forms the molecular backbone of RNA – that connects each oligomer via the 3’ carbon atom of one sugar molecule with the 5’ carbon atom of another. ‘Prior to us all attempts led to mixed 2’,5’- and 3’,5’-linked oligomers, while contemporary RNA contains exclusively 3’,5’-linkages. Thus, our study also solves the problem of the origin of 3’,5’-linkage specificity of RNA,’ explains Sponer. 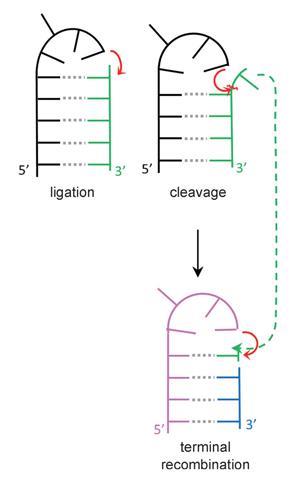 The team proposed a catalytic mechanism for short strands of RNA

However, their experiments achieved a yield of just 0.13% – a figure which doesn’t inspire much confidence in Jack Szostak, who studies life’s origins at Harvard University, US. ‘The prebiotic relevance of something that low yielding would be doubtful,’ he comments. However, Sponer argues that a low yield could have been enough to create the first templates required for a subsequent and more efficient template-directed polymerisation to take over.

Herein lies the second mystery that Sponer and Di Mauro’s team tackled – how it happened that the first short oligonucleotide sequences went on to develop catalytic function.

Researchers have previously reported the synthesis of catalytically active RNA molecules but they all involve long oligonucleotide chains comprising several hundred nucleotides. The problem is that such large RNA molecules must have first evolved from shorter sequences, but so far no chemical model has explained how short RNA sequences acquired the catalytic activity to do this.

‘Together, these efforts help fill in a significant gap in the RNA world hypothesis,’ comments Niles Lehman from Portland State University, US. ‘They are perhaps the clearest demonstrations of these reactions to date, and they strongly support a recombinatory RNA world. The notion that RNAs polymerized spontaneously and later recombined to make catalysts is now gaining in favour.’

Di Mauro says the challenge is now to find the conditions for self-polymerisation of other cyclic nucleotides as well as mixtures, and reveals they have preliminary results for both 3’,5’ cyclic cytidine monophosphate  and 3’5’ cyclic adenosine monophosphate. ‘Our two recent studies capture important parts of the story, but […] a lot of additional issues, such as replication, remain to be explored,’ he says.