Early life may have contained both RNA and DNA, rather than just RNA

Early life may have emerged from a mixture of RNA and DNA building blocks, developing the two nucleic acids simultaneously instead of evolving DNA from RNA.

As RNA gave way to DNA, some think a mixture of nucleotide building blocks would have been inevitable. As these nucleotides connected to form strands, the thermodynamic and kinetic stability of pure RNA and DNA duplexes would drive these nucleic acids to accumulate in primitive cells, while less thermally stable complexes containing one strand of RNA and one strand of DNA fell apart.

Ramanarayanan Krishnamurthy, at the Scripps Research Institute, and colleagues wondered if duplexes where each strand contains both RNA and DNA nucleotides were stable enough to have been possible intermediates during the transition from RNA to DNA. The researchers purchased commercially synthesised sequences of RNA and DNA, six to 16 bases long. In some sequences, they systematically changed purine RNA nucleotides, containing the bases adenine or guanine, into the corresponding DNA purines. In others, they changed pyrimidine RNA nucleotides, with cytidine or uracil bases, into pyrimidine DNA nucleotides with cytidine or thymidine bases. The result was several series of nucleic acid duplexes that ranged from having all RNA nucleotides to none at all. 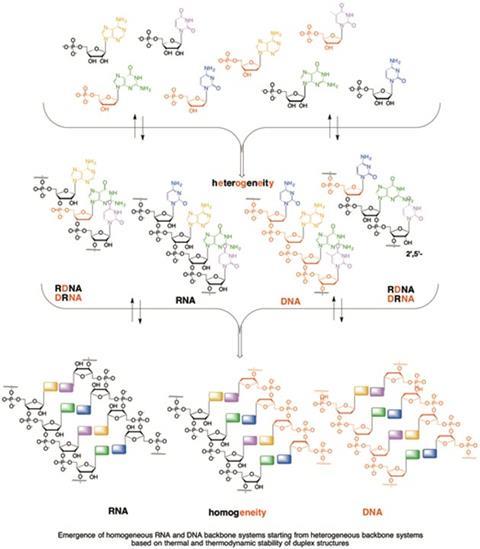 To test the thermal stability of these sequences, the researchers heated each duplex to separate the strands. Then they measured the increase in UV absorption as the strands melted. The faster the absorption increased as the temperature increased, the faster the strands separated, indicating a less stable duplex. Many mixed duplexes with strands containing both RNA and DNA nucleotides melted as much as 20 degrees before pure RNA or pure DNA duplexes, indicating they were significantly less thermally stable than the pure duplexes.

Krishnamurthy says they were surprised to see this instability trend hold for a variety of sequences. Without ways to prevent these mixed sequences from forming or primitive catalysts to overcome their instability, the researchers imagine that the most efficient path to pure RNA and pure DNA duplexes would start from a mixture of both nucleotides, rather than that nucleotide mixture developing from a pool of pure RNA.

‘This paper presents significant results that will influence our thinking about the way that RNA and DNA could have interacted in primitive life,’ says David Deamer, at the University of California, Santa Cruz, US. Depending on conditions, however, RNA and DNA have very different abilities to withstand chemical changes like depurination, deamination, and hydrolysis. The chemical stability of these two nucleic acids should also be considered when thinking about how they could become incorporated into the earliest forms of life, he adds.

The assumption that a primitive world was not chemically sophisticated enough to differentiate RNA and DNA building blocks challenges some evidence for the capabilities of the RNA world, says Steven Benner, of the Foundation for Applied Molecular Evolution in the US. Small molecules that enhance the activity of modern enzymes, such as coenzyme A, have RNA nucleotide tails. This indicates that these RNA cofactors could have been part of a RNA world able to assemble pure RNA and pure DNA from a pool of both nucleotides, he says.