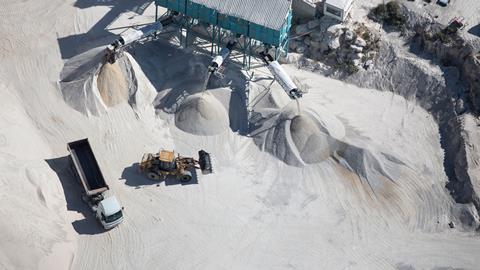 Four billion tonnes of cement are produced every year – humanity doesn’t make more of anything else – and its creation accounts for around 8% of the world’s carbon emissions. But cement’s polluting ways could be over if its production could be electrified. That’s according to researchers in the US who have developed an electrochemical process that can produce cement that has almost no carbon footprint.

Cement production involves the breakdown of limestone (calcium carbonate) in high temperature kilns usually powered by burning fossil fuels – both of which release carbon dioxide. Current efforts to reduce cement’s carbon emissions include carbon capture and storage of flue gases, alternative fuels or supplementary cementitious materials. However, these approaches can only partially cut the carbon emissions of the process not eliminate them altogether.

‘The world needs to deeply decarbonise, and using low-cost renewable electricity to do so is one of the most promising avenues if we can find ways to “electrify everything”,’ says Yet-Ming Chiang at the Massachusetts Institute of Technology who led the study. ‘This is already happening with ground transportation and electricity generation, but some industries including aviation, cement and steelmaking have no option to electrify at this time.’

Rising to the challenge of electrifying cement production, Chiang and his colleagues have now developed an electrolysis process that can be powered by renewable, carbon-free electricity. It can not only operate at room temperature but operates in water to produce Portland cement.

The process uses an electrochemical reactor that first breaks calcium carbonate into a calcium hydroxide (slaked lime) powder. This process releases a stream of pure carbon dioxide that the team says would make it easy to capture and sequester or use in industry, as well as streams of oxygen and hydrogen. The calcium hydroxide powder was then reacted with sand and clay at 1500°C using clean-burning hydrogen and oxygen tapped off from the first step to replace polluting fossil fuels.

The resulting ‘electrified’ cement was identical to Portland cement, but its carbon footprint was virtually zero. ‘Our goal was to change nothing about cement’s final chemistry. We’ve only changed the way that it is made,’ explains Chiang. ‘We know that new kinds of cements are not easily adopted by industry and to make a real impact on climate change, it’s important that clean technologies are implemented as soon as possible.’

But materials chemist Karen Scrivener, head of the laboratory of construction materials at the Swiss Federal Institute of Technology in Lausanne, is sceptical. ‘This does not seem to have any particular advantages over technologies which are currently being investigated,’ she comments. What’s more, Scrivener lacks confidence in its scalability. ‘A modern cement plant typically produces 10,000 tonnes of cement per day – it is very difficult to imagine this scale of production by electrolysis.’

However, Chiang disagrees and believes the technique could be scaled-up to match current demand for cement. ‘Electrochemical synthesis of cement is a new approach, not much has been tried and scaling-up is never easy,’ he says. ‘We hope that this work will inspire others to come up with their own creative ways to electrify the cement industry.’