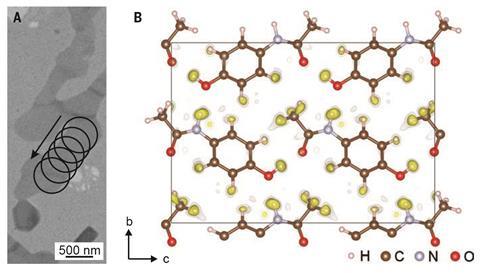 Transmission electron microscopy image of a paracetamol crystal (left) with the movement of the electron beam indicated by the circles. The crystal structure of this form of paracetamol is revealed (right) including the position of hydrogen atoms

A new algorithm created by Czech and French researchers allows 3D electron diffraction patterns to reveal nanocrystal structures down to the positions of individual hydrogen atoms. Researchers believe its uses could range from studying pharmaceuticals to catalysis and beyond.

X-ray crystallography, in which the diffraction pattern of x-rays passed through a sample is used to infer atomic positions, has been the mainstay of crystal structure analysis for 100 years. However, as x-rays interact only weakly with matter, acquiring a strong-enough signal to place fine details like hydrogen atoms is often impossible – even with large single crystals. One alternative is electron crystallography, in which de Broglie electron waves replace the x-rays. Ironically, the problem here is that the interaction is too strong: whereas researchers can safely assume an x-ray photon has diffracted only once on its journey through a crystal, an electron may diffract multiple times as it passes through even a nanocrystal. ‘That’s more complicated and more computationally involved,’ explains Lukáš Palatinus of the Czech Academy of Sciences in Prague.

The first example – a form of paracetamol – is especially important because proton positions affect pharmaceuticals’ abilities to form hydrogen bonds, and can therefore alter both solubility and activity. However, organic compounds can easily be damaged by electron beams. ‘We are not limited to the radiation-hard oxides and metal alloys, but we can go to softer and sometimes more interesting materials,’ says Palatinus. The researchers are now working to extend the technique to more complex crystals and make it more user-friendly. ‘We want to do something that anybody can take and use,’ says team member Philippe Boullay of CNRS in France.

Xiaodong Zou of Stockholm University in Sweden is impressed. ‘I’ve been working in the field for a long time and I was always thinking, and believing, and hoping that [the location of hydrogen atoms in nanocrystals] would be the strength of electron crystallography,’ she says. Lynne McCusker of ETH Zurich in Switzerland agrees: ‘This dynamical refinement is something that we’ve needed for electron diffraction to make this jump to the state of x-ray diffraction,’ she says. ‘Finding the hydrogen atoms is just an indicator that they can see a lot more than they used to be able to.’ She says there’s still much to be done to make this a useful technique. ‘There’s a lot of technical development that’s more or less done for the x-rays, but it’s not done for electrons yet.’