Two teams have shown for the first time how to use high energy, ‘hard’ x-rays experimentally for ‘ghost imaging’, which indirectly reconstructs pictures of objects. The approach should be a less damaging way to investigate cells, as it needs less x-ray exposure. Shensheng Han from the Chinese Academy of Sciences in Shanghai adds that his group’s approach could also extend to x-ray, neutron or electron crystallography of non-crystalline samples. 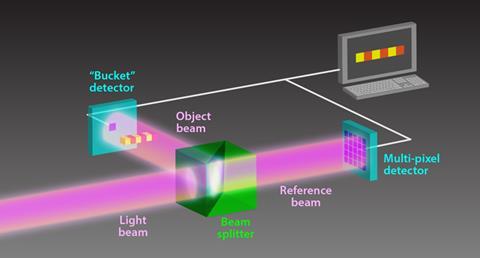 The new technique allows x-ray ‘ghost’ images of samples to be built up by comparing a reference beam with one that passed through the material being studied. The technique should be less destructive on biological samples than other techniques that make use of x-rays

If you use a smartphone to take a digital picture, it records the colour and intensity of light hitting and bouncing off objects using a detector with a pixelated grid. Ghost imaging constructs sample pictures indirectly from the intensity of two separate but spatially related light beams. An object beam is pointed at a sample with a detector behind it, but a reference beam is only pointed at a detector. Two beams can be related, for example, because scientists made them by splitting a single source beam.

Typically, the object beam passes to a single-pixel ‘bucket’ detector, while the reference beam passes to a separate multi-pixel detector. Light intensity and positional information detected from the reference beam can then help work out an image. If the multi-pixel detector records a ‘hit’, but the bucket detector doesn’t ‘we know that the sample has absorbed the beam’, explains Daniele Pelliccia from RMIT University in Melbourne, Australia.

The spatial relation between the beams means the hit’s position in the multi-pixel detector is where the beam should have hit the bucket detector. ‘In this simplified view we could reconstruct the sample’s shadow one pixel at a time,’ Pelliccia says. Whereas using weak beams with traditional imaging methods generates noisy images, ghost imaging works with a weak object beam if the reference beam is strong. That would be especially useful for x-rays, whose energy damages samples.

Scientists first did ghost imaging with visible light photons related by quantum mechanical entanglement, before applying it to classical split light beams. Pelliccia had worked in quantum optics before moving to investigate x-ray optics at RMIT, where he contemplated reproducing ‘interesting visible light phenomena’. Then, he was invited to use the European Synchrotron Radiation Facility in Grenoble, France, when it was producing x-rays with randomly speckled patterns that provided useful spatial information. He and his colleagues split this beam, measuring speckle changes to collect ghost images of a copper wire that x-rays couldn’t pass through.1

In a second paper published at the same time, Han’s team abandons the beam-splitting approach that requires separate detectors.2 Han explains that his team had shown x-ray ghost imaging’s power theoretically in 2004. Then, they had figured out that using Fourier transform calculations to break down detected x-ray intensity fluctuations they could also extract information about a sample’s chemical structure. However, it’s difficult to split hard x-rays, which hampers the Chinese scientists’ Fourier transform ghost imaging.

Consequently, Han and his colleagues pass a single x-ray beam from the Shanghai Synchrotron Radiation Facility through a slit array and porous gold film to get random speckling. They then shuttle their sample, a gold film with five slits on a silicon nitride substrate, from side to side. The sample therefore passes in and out of the beam, which is travelling to a single fixed detector. When the sample is in front of the detector, the Chinese scientists record the object beam, and when it’s not they record the reference beam. The researchers interpret the measured intensity fluctuations to create a ‘ghost diffraction pattern’. 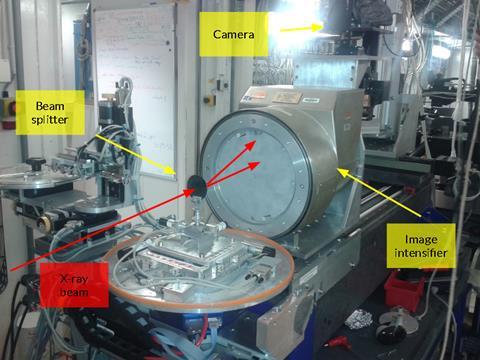 Henry Chapman from DESY, the German Electron Synchrotron in Hamburg, says that the papers are landmarks. ‘The current approach is a proof of principle, and perhaps is a more laborious way to get an x-ray image of an object,’ he adds. ‘But it is exciting because of the prospects.’ He suggests entangled x-ray and visible photons could enable completely damage-free ghost imaging.

The x-ray ghost images may help crystallography, suggests Dilano Saldin from the University of Wisconsin–Milwaukee in the US. Whereas conventional detectors cannot directly measure critical phase information for x-ray waves that diffract from samples, ‘the new ghost images are certainly sensitive to the phases’, he says. ‘The question is how this information can be extracted,’ Saldin adds. ‘I would say this is uncertain at the moment.’

‘Pushing ghost imaging into the x-ray region is a technical triumph,’ says Miles Padgett from the University of Glasgow, UK. ‘Clearly, it works. The challenge now is to demonstrate the full range of ghost images, and quantitative improvement that might be obtained, particularly where these images would not have been possible through direct imaging techniques.’

Han says that his team now wants to demonstrate nanometre imaging resolution for natural samples. Pelliccia is interested in combining ghost imaging with elemental mapping, as the x-ray fluorescence detectors this technique uses don’t have spatial resolution and could be the ‘bucket’.