Elemental discoveries at the cellular level 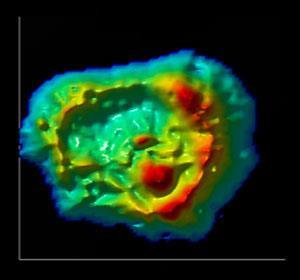 Emil Malucelli, at the University of Bologna, and colleagues explain how they can now quantify these elements down to the million atoms per cubic micrometre level. In a proof of principle that also demonstrates the technique’s potential they examined a line of human colon cancer cells. They tested two types, those sensitive to the anticancer drug doxorubicin and those that are resistant. The analysis revealed little difference in the distribution of elements with the exception of magnesium. The trace metal was found at much higher concentrations in the nucleus of the drug-resistant cancer cells and in the perinuclear region of the drug-sensitive cancer cells.

The role of trace metals and other elements in the cell often pivots on their precise compartmentalisation. However, little is actually known about where even the vital elements carbon, oxygen, nitrogen and others are concentrated in the cell, despite our understanding of their positions within molecules, proteins and even organelles. Knowledge of the crucial light elements is even sparser. Current techniques can provide local ratios, but not concentrations.

In earlier work, the team combined x-ray techniques with atomic force microscopy to map local magnesium distribution. However, this relied on an external fluorescence standard to calculate magnesium concentration and so was limited. The new technique does not need any external reference and can work on a whole cell by exploiting the high-resolution capability of the atomic force technique. The team hopes that the development of their high-powered hybrid technique, which reveals this important measurement regarding each element, will open up elemental distribution as a new area of research.

‘The relevance of locating carbon, nitrogen and oxygen at the nanoscale is both methodological (it has never been done before) and useful,’ explains team leader Stefano Iotti. ‘For carbon, our approach opens up the possibility of locating carbon-based nanoparticles inside the cells, such as carbon nanotubes, which represent the new frontier of drug delivery systems. For oxygen, it opens up the possibility of studying the oxidative status of cells in relation to the energetic status (oxygen entering mitochondria) or peroxidation level, which are linked to ageing and cancer.’

‘This study well exemplifies the increasing power of correlative microscopy approaches to unravel the structure and function of cells,’ says Enzo Lombi of the University of South Australia. ‘This new approach, which combines synchrotron techniques with AFM, is applicable to virtually any cell. When combined with molecular biology techniques this approach could provide a powerful tool to link gene expression to quantitative element distribution and therefore infer the mechanisms involved in cell processes.’