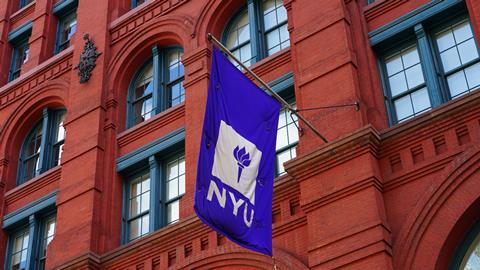 The abrupt firing of renowned chemist Maitland Jones by New York University (NYU) has set off a firestorm in higher education and the chemistry community. The university terminated his contract just before the start of the autumn term, after 82 of his 350 students signed a petition complaining that his organic chemistry class was too difficult, and that they didn’t like the way that he ran the course.

As first reported by The New York Times, students who signed the petition claimed that Jones lacked empathy for those students faced with family or other personal problems. They also complained that his organic chemistry course workload amounted to two-and-a-half hours of lectures on top of up to four hours of lab work weekly, which was too much when other courses were taken into account.

Jones, who is just shy of his 85th birthday and wrote a leading organic chemistry textbook that’s currently in its fifth edition, tells Chemistry World that the petition was submitted in spring, but he was not copied in on it and did not see it until a New York Times reporter sent it to him last month.

Chemistry professors who disagreed with the university’s decision wrote to deans to express concern that it could harm academic freedom and the quality of instruction at the institution. The authors of the letter wrote that ‘the actions taken by the Deans constituted an unnecessary overreach’. They suggested that the situation ‘could have been dealt with effectively through open dialogue with the students concerned’, as had been the case with previous petitions by students to the department administration.

‘Instead, the course of action taken this semester has created a sense of unease among both our tenured and contract faculty that students, in an effort to influence their grades could, at any time in any course, send a petition’ the letter continued.

Jones believes that this was signed by 24 faculty members.

‘We’re operating from a limited set of facts, but based on what has been reported … the students were unhappy with how the course was delivered, they wrote a petition and the school reacted by allowing people retroactively to withdraw from the class if they weren’t happy with their grade, even though the class was over,’ Saint Louis University assistant chemistry professor Paul Bracher explains. ‘And then it seems NYU either fired him or didn’t renew his contract, as a direct result of that action by the students.’

Bracher, who graduated from NYU with an undergraduate degree in chemistry in the late 1990s before Jones worked there and was still at Princeton, says his coursework included the first edition of Jones’s textbook Organic Chemistry. ‘My understanding is that NYU was one of the first colleges to adopt his new textbook, and I thought it was wonderful,’ he recalls.

Even as a student back then, Bracher remembers accessing Jones’s website. This was at a time when most courses were not online, yet he was able to view Jones’s exams posted there, as well as personal information about the professor.

‘You might even say that it was one of the first chemistry blogs,’ Bracher notes. ‘So if you’re NYU and you hire Jones, you know what you are getting, you know how he’s going to deliver the class – you’ve seen his textbook, you’ve seen his exams online and that they are kind of wacky,’ Bracher continues. ‘I think NYU did him dirty,’ he adds. ‘I’m disappointed as an alumnus, and as a fan of Maitland Jones.’

Bracher is surprised that not one of the dozens of students who signed the petition has spoken out and listed their grievances. ‘I think that is somewhat telling – no one has been willing to put their name behind it in public,’ he says. ‘They’re just an anonymous group of people at this point.’

But at least one of Jones’s former students has come forward publicly. ‘Every semester, I tell my students the story of how NYU’s organic chemistry professor had a habit of publicly announcing the lowest exam grade and making snide comments at that person’s expense,’ tweeted Leslie Berntsen, a psychology professor at the University of Southern California. ‘In fall 2009, that person was me.’ She did note, however, that Jones never mentioned her by name.

One of the chemistry professors at NYU who disagreed with the university’s actions and wrote to university deans to express their concerns was associate chemistry professor Stephanie Lee. ‘I was one of the professors who signed the letter to the deans,’ she tweeted. The reality is more complicated than it might appear, and discourse framing the situation as students versus faculty misses the point, she said.

‘We are all on the same side of wanting students to succeed but we are using misaligned, and in many cases flawed, metrics to evaluate success. One consequence of this misalignment is that our actions are becoming fear-driven,’ Lee continued. ‘Students fear that one low grade will derail their future careers. Faculty fear on one hand that we are sending our students into the world unprepared and on the other hand that our jobs are only as secure as our course eval scores.’

Bracher calls Jones’s firing ‘an undesirable outcome’, and he suggests that there is plenty of blame to go around. ‘It is so easy to lose control of a class like this,’ he says. ‘You need to support your students, you need to have empathy, and from just what I’m seeing online from a lot of students, it seems like Jones maybe didn’t take the time and the care to interact with his students in a way that was supportive.’

According to Bracher, a lot of this boils down to course design, such as whether students feel that a bad score on one exam is going to completely wreck their grade.

On RateMyProfessor an equal number of reviews give Jones an ‘awesome’ rating as an ‘awful’ one. Reviews range from calling him ‘the best professor I’ve ever had’ and ‘generous with curves’, to a man who ‘simply could not teach’ and used video lectures that were ‘an incoherent mess’ with exam averages that were never above 50%.

‘What’s clear to me is this was avoidable,’ Bracher says. ‘Losing control of a class is not a one-time thing but occurs over many events – so that’s on the professor.’ At the same time, he points out that students have survived and excelled in Jones’s class before and there is always an option to seek more help from him or his teaching assistants. Further, Bracher asserts that NYU’s administration knew exactly what it was getting when it hired Jones.

‘I don’t think that he was teaching this class any differently than he probably did 10 years ago, 20 years ago, 30 years ago, or 40 years ago at Princeton,’ Bracher states. ‘People made it through it, and there are plenty of glowing reviews of Jones out there as well.’

Medicinal chemist and drug discovery expert Derek Lowe agrees that the pandemic significantly disrupted education at all levels, and particularly affected a difficult course like organic chemistry. ‘That’s partly because of the lab work (or lack of it under remote conditions), but also because of the difficulty of mastering the material solo,’ Lowe wrote.

‘If Prof Jones is behind the times in his teaching methods, has become too inflexible over the years, or is simply losing a few steps at the age of 84, then those are real factors to consider,’ asserts Lowe, an industry blogger. ‘But if NYU is firing him with an eye to placating the students (and their check-writing parents), that’s a bad idea.’

Bracher echoes Lowe. ‘People of my generation or older tend to look at kids these days and say, “When I was in school, we took this hard class, and we suffered from it but we made it through and we were better people because of it”,’ Bracher says. ‘Sometimes older generations don’t connect as well with younger generations, and Jones is in his 80s.’

Dan Singleton, an organic chemistry professor at Texas A&M University, was surprised that Jones taught so many students in two sections – one dedicated to problem solving and another to traditional lectures. ‘Our sections are limited to 100 students, and I view that as too many for the kind of feedback needed without tremendous extra support, tweeted Singleton, who acknowledges that Jones is long-time friend.

The New York Times report said the average grade in Jones’s class hovered around 30% before students drafted their petition. Meanwhile, Singleton stated that the exam averages in his own classes haven’t been below 70 for 20 years. ‘I never, ever suggested that students did badly,’ Singleton added. ‘That never helps,’ he stated, arguing that keeping students happy isn’t pandering and promotes learning.

Pedagogically, professors of chemistry and other disciplines are increasingly realising that students need more support, especially when being taught difficult material, Bracher says. ‘Mental wellness is a huge thing – finding better ways to teach material – and that’s not a bad thing.’