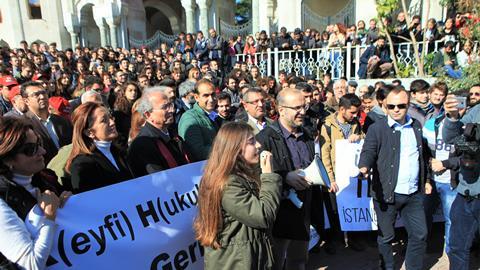 The crackdown on even the slightest perceived dissent after last year’s failed coup in Turkey has had serious repercussions for the country’s academic productivity. Since the attempted military takeover in July 2016 the number of papers published by Turkish scientists and academics has dropped by 28%.

Last year, a faction of the Turkish armed forces launched a coup – that was ultimately unsuccessful – to take control of key sites in Ankara and Istanbul. Days of uncertainty followed, with hundreds killed, thousands injured and tens of thousands detained. The government blamed US-based cleric Fethullah Gülen for masterminding the attempted coup, and started accusing and arresting thousands of people for links – real or imagined – to him.

According to journalist-run monitor Turkey Purge, over 8000 academics have lost their jobs in the country since 15 July last year. Fatih University, a private institute based in Istanbul, was hit hardest and was closed one week after the attempted coup, leaving 514 unemployed. Another 14 institutes have been shut down since last year.

The sackings and university closures are now starting to take their toll on Turkish scientific output. According to a study by British–Turkish academic collective, Freedom for Academia, the number of papers published by the country’s universities fell 28% since the attempted coup last year to 27,600. While the study relies on extrapolation for 2017, one of its authors, Mesut Erzurumluoglu, says the figures are convincing. ‘We think that we may be wrong, but only by being too conservative. The decline in numbers may be even larger,’ says Erzurumluoglu, a postdoc associate at the University of Leicester. The study reveals that the greatest fall in publications was seen in the social sciences, followed by medicine. Chemistry publications fell just over 5%.

‘You don’t have to be a genius to see that there’s going to be a huge brain drain,’ adds Erzurumluoglu, who said that the positions left by academics who have been sacked, imprisoned or who have fled are being filled by ‘cronies’. ‘This is going to be a problem in Turkey for years to come, because these people will pick other cronies, and there will be no scientific ethic.’ He adds that the study will be repeated in the coming years to keep tabs on Turkey’s research output.

A couple of days after the coup, a Turkish biochemist, who was visiting in a British university found out, through an official government press release, that he had been suspended from his job. The lecturer, who doesn’t wish to be named for fear of reprisals against his family back home, had flown into the UK the same day of the attempted coup.

He is still working in the UK a year later and says he now sees little point in returning to Turkey. ‘I don’t have a job there anymore, so there’s no financial income. I haven’t been accused of anything, they just sacked me,’ he tells Chemistry World. He says that the government’s strategy is to punish everyone economically who are even slightly critical of Erdogan’s administration.

‘They get sacked and their passports get taken away, so they can’t travel abroad to find another job,’ he says. ‘They also have to sign up at the police station three times per week. But that’s not the end of it. They can also go to jail and spend at least a year locked up before appearing in court. Private companies are also being pressured not to hire fired academics.’ He adds that the government is ‘trying to starve’ critics.

‘My students are suffering because I lost my job. In addition, the university and the country also suffer, because we used to publish a few papers per year, and that obviously doesn’t happen anymore. We spent millions of pounds setting our lab up, and now there’s nobody there to manage it effectively,’ he adds. ‘I was lucky to be outside the country, so I can help my family from here, but many others are relying on savings or had to go back to their parents’ houses.’

International network Scholars at Risk has been closely following these developments. Since the attempted coup until May this year, the organisation has received 520 applications for assistance from Turkey. The organisation had previously received 59 requests in January 2016, after many academics signed an open letter asking the government to end a crackdown on Kurdish rebels in the south-east of the country. Between 2000 and 2015, Scholars at Risk received just 23 applications for assistance from academics in Turkey. The organisation confirmed that they have never seen so many requests from a single country.

Clare Robinson, advocacy director of Scholars at Risk, says the situation in Turkey has not improved over the past year. ‘Since the coup attempt roughly one year ago, the higher education sector in Turkey has been the target of state actions that strongly suggest retaliation for the non-violent exercise of academic freedom, freedom of expression and freedom of association,’ Robinson says.

The press directorate of the Turkish government declined to comment.