Reprogramming the genetic code of bacteria to incorporate an unnatural amino acid has allowed scientists in the Netherlands to create a new metalloenzyme capable of catalysing an enantioselective reaction. 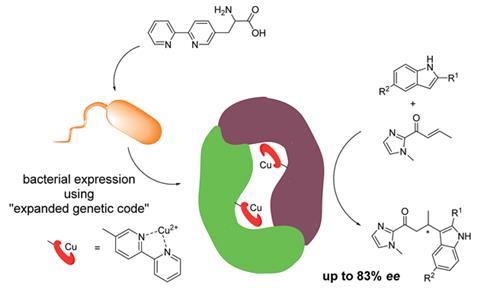 ‘Nature is extremely good at catalysing reactions with very high rate accelerations and very high selectivity. But it does so, from our perspective, with a relatively limited set of reactions,’ explains Gerard Roelfes from the University of Groningen, the Netherlands, who led the study. His group is targeting existing reactions that use traditional catalysts, but fail to achieve the same rate acceleration and selectivity as enzyme catalysed reactions.

Metalloenzymes combine the flexibility of metal catalysts with the high activity and selectivity of enzymes. Artificial metalloenzymes are produced by inserting a catalytically active transition metal complex into a biomolecular scaffold, like a protein.

Roelfes’ team engineered Escherichia coli cells to include a copper-binding amino acid into one of its proteins. This method requires no further chemical modification or purification steps, giving it an advantage over existing methods. The resulting metalloenzyme was tested on a catalytic asymmetric Friedel–Crafts alkylation reaction, achieving an enantiomeric excess of up to 83%.

Takafumi Ueno, who researches the mechanisms of chemical reactions in living cells at the Tokyo Institute of Technology in Japan, is impressed by the work. ‘It could be applied not only for rapid screening of artificial metalloenzymes but also for in vivo use of them to govern cell fate in future”.

The group are now looking to develop new artificial metalloenzymes with the capability to perform chemistry that traditional transition metal catalysts cannot. Ultimately, they hope to integrate these enzymes into biosynthetic pathways.