Analysis of a 4.5 billion-year-old meteorite has confirmed that the element curium was present during the formation of our solar system, settling a 35-year debate over the issue. 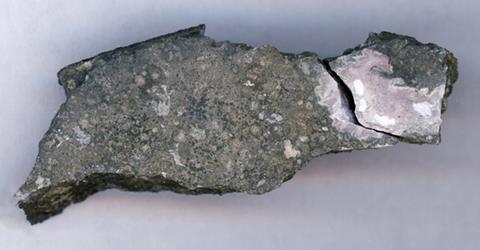 Uranium isotope analysis in this 4.6 billion years old meteorite rock suggests the presence of a long-lived curium isotope in

Researchers at the University of Chicago, US, measured the ratios of different uranium isotopes in an inclusion within the meteorite, which dates back to around the time the solar system was formed. Radioactive curium-247 decays into uranium-235, so rocks with a higher proportion of uranium-235 compared with other radionuclides can indicate that curium was present around the time the mineral was formed. But the difference is too small to detect in rocks with a high or average amount of natural uranium, and different groups of scientists have argued over inconclusive measurements over the years.

The particular inclusion used in this analysis – nicknamed Curious Marie after the element’s namesake Marie Curie – was chosen because it has an extremely low uranium content. Even so, it has taken decades to develop a mass spectrometer sensitive enough to detect an excess of uranium-235. The researchers found the uranium in Curious Marie had 6% more uranium-235 than would be expected – a finding they say can only be explained by the presence of curium-247 around the time of its formation.

Further calculations have indicated that the amount of curium was similar to the amounts of other heavy elements such as plutonium-244 and iodine-129, which are thought to have been produced by exploding stars. The team hope these findings will help other researchers construct more advanced models of the birth and early evolution of the solar system.