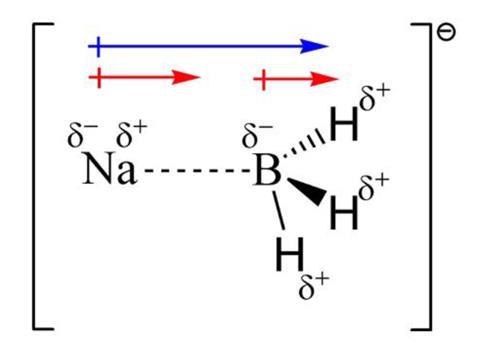 The unusual nature of the sodium–boron bond in the recently synthesised NaBH3– cluster has been described using valence bond (VB) theory.1 An international research team has convincingly demonstrated that this bond is neither dative nor typical covalent, as had previously been proposed, but rather shows a combination of properties that haven’t been seen before. The new results, which unify previous descriptions of this system, could help to solve an ongoing debate around this unprecedented bonding situation.

‘The authors figured out what’s going on with the strange bond in NaBH3–,’ comments John Galbraith at Marist College in the US. He explains that previous reports were contradictory because the sodium–boron bond doesn’t fit into any of the predefined bonding categories. ‘There are highly developed theories that explain most bonding situations. We get very excited when something comes along that doesn’t fit the existing theories,’ he says.

Everything is unusual about this bond!

The controversy started with a discussion on the dative versus classical covalent nature of the bonding2,3 and then went on to include more exotic descriptions such as a combination of coulombic attraction and electron sharing4 and the proposal of a new ‘spin-polarised bond’ category.5

Author Slavko Radenković from the University of Kragujevac in Serbia points out that the VB model reconciles all these different viewpoints. ‘The most striking feature of the Na–B bond is that the electron pair on the sodium atom is split into two singly occupied hybrid orbitals, one pointing towards the boron atom and including a single electron, and the other pointing opposite to the boron atom and housing another single electron. This is very unusual for what initially seemed to be a straightforward two-electron bond.’ He adds that polarisation of the electron pair enables a large dipole–dipole interaction that stabilises the formally covalent VB structure. ‘The split electron pair also leads to a two-centre, one-electron resonance interaction between sodium and boron, but this is just a secondary component of the bonding energy. Everything is unusual about this bond!’

Gernot Frenking at the University of Marburg in Germany, who has also been trying to decipher the unique behaviour of this system, mentions that previous studies used molecular orbital approaches instead of VB methods. ‘The present results suggest that the Na–B bond in NaBH3– mainly involves electrostatic attraction, and a covalent interaction with the largest part coming from one-electron bonding. This is astonishing,’ he says.

The scientists used a special form of the VB method – called the breathing-orbital valence bond approach – which Radenković says has all the necessary features to perform accurate calculations. Gabriel Merino from Cinvestav in Mexico, who was not involved in the study, explains that this technique allowed the researchers to dissect and quantify the different bonding components involved. He points out that although NaBH3– is small, describing its bonding situation is a challenge for any methodology due to interference of the atoms’ wavefunctions. ‘An important lesson here is that we should not underestimate the complexity of small systems,’ he says.

Radenković notes that the unusual bond is also found in LiBH3– and KBH3–, but Merino thinks this still might not be the end of the story. ‘I believe that this will not be the last word about this system and that more contributions will come, testing other similar molecules, tools or approaches.’