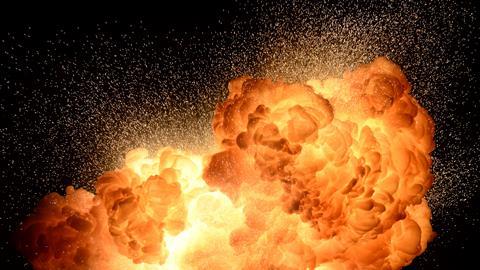 ‘Well, you’re just going to blow it up, the stereochemistry and regiochemistry isn’t going to matter.’ This preconception among explosives researchers has now been smashed by the first study on isomers of energetic cyclobutanes. Among the compounds, researchers discovered a rocket propellant with a freezing point much lower than the commonly used nitropentaglycerin and a solid explosive 25% more powerful than trinitrotoluene (TNT).

Since its discovery more than 150 years ago, TNT has been the state of the art when it comes to melt-castable explosive, meaning compounds that melt below 100°C and can then be poured into moulds. But TNT is toxic, produces a lot of waste during production and, ‘compared to CL-20 or HMX or RDX, is a total loser’, says energetics researcher Adam Matzger from the University of Michigan, US, who wasn’t involved in the study. Scientists have long been looking for alternatives to TNT – compounds that have higher explosive power but are still melt-castable.

A team led by Jesse Sabatini from the US Army Research Laboratory and Phil Baran from the Scripps Research Institute has now shown that they can fine-tune explosives’ properties simply by modifying their atoms’ spatial arrangement.

While this doesn’t come as a surprise to synthetic chemists, it does to many working in the field of energetics, says Sabatini. Here, stereo- and regiochemistry has been ignored as isomers are often predicted to have similar explosive power.

Although the synthesis ‘was not a walk in the park’, says Baran, the team made four stereoisomers and two regioisomers of 1,2,3,4-tetrakis-(nitroxymethyl)cyclobutane. The only liquid of the bunch – one of the stereoisomers – surprised with a freezing point lower than –40°C, making it useful as a rocket propellant. It is less impact sensitive and has a higher density than the common propellant plasticiser nitropentaglycerin, which already freezes at –3°C.

But the compound the researchers got most excited about is one of the regioisomers. It turned out to have a 25% higher detonation pressure than TNT and a melting point that puts it in the melt-castable range.

‘I had expected property modifications, but not quite as dramatically as what was seen here,’ says Matzger. ‘I think, to me, the most important thing is that none of this was predictable, even using the most modern approaches that we use for predicting energetic materials properties.’

However, it is unlikely that one of the compounds will replace TNT anytime soon. ‘I always tell people pharmaceutical development is lightning-fast compared to energetics development,’ laughs Matzger, pointing out that it takes a long time to create new explosives formulations and integrate them into engineered systems.

Nevertheless, Sabatini hopes their work will inspire others. ‘To those that are in the energetics field, I would say dismissing stereochemistry and regiochemistry will be done at your own peril.’