New formulations get a handle on urea’s problematic properties

US scientists have reformulated the fertiliser compound urea as a co-crystal to reduce its solubility and tendency to take on water. This could be good news for farmers and environmentalists everywhere.

Urea, a natural product first made in the lab nearly 200 years ago, is the 21st century farmer’s nitrogen fertiliser of choice. Whilst scientists have devised better methods for making urea, they have struggled with its stability. Urea is generally used in a pure, granular form. However, damp farm conditions can cause urea to clump. This tendency towards stickiness affects how farmers apply it to crops, which can lead to over-application. Over-application increases surface run-off into watercourses causing eutrophication and is a major environmental concern. Nonetheless, urea is a popular fertiliser based on cost and reduced health and safety concerns compared to other fertilisers such as ammonium nitrate, which can be explosive.

These issues inspired Christer Aakeröy’s team at Kansas State University to reformulate this popular fertiliser. The question of where to start first was answered by interrogating computational data about the structural landscape of urea. From this they identified favourable co-crystal combinations, structures and reaction sites, reducing the number of costly speculative experiments. Co-crystals, where the active solid – in this case urea – is combined with another solid chemical to form a crystalline solid, are used to stabilise compounds in medicines as well as energetic materials. However, co-crystal formulations of agrochemicals have not been extensively explored. Using this systematic approach the group were able to successfully anchor the urea into a solid form. They could then modify its properties in a modular way to create a co-crystal able to withstand humid conditions with lower solubility. 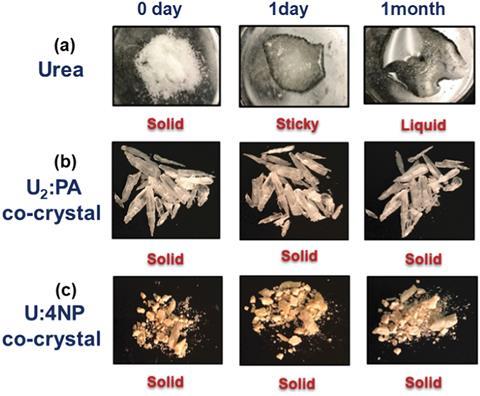 Even though urea becomes a transparent liquid in less than 24 hours at 85% humidity, both U2:PA (pimelic acid) and U:4NP (4-nitrophenol) remain crystalline solids for over one month

‘Urea is a rather simple molecule with functional groups that facilitate molecular-recognition driven co-crystal synthesis’ and so an ideal target to develop explains Aakeröy. Two key co-crystals emerged from the study: urea with the co-formers pimelic acid and 4-nitrophenol. Commenting on how different co-formers hydrogen bond with the urea to form synthons, Aakeröy cautions that ‘if the co-former does not have a complementary chemical functionality to deliver one of these synthons, it is unlikely to be a good candidate for co-crystallisation’.

These combinations exhibit dramatically decreased solubility by 23 times. The co-crystals’ tendency to absorb and adsorb water is also significantly lower than pure urea; they remain in a solid form for over a month despite very humid conditions. Further preliminary studies revealed that these two co-crystals do not negatively affect plant viability. Aakeröy says their approach is scalable, and could provide a real alternative to existing cheap pure urea.

‘This is a very exciting development,’ comments Jonathan Steed, an expert on supramolecular chemistry based at Durham University, UK. He says the haphazard methodology of previous co-crystal studies has delayed developments in the area. ‘Aakeroy and colleagues have demonstrated that a systematic, predictive approach allows co-crystal formation with a very high degree of success.’ By targeting properties, Steed believes that this approach will help shape more deliberate co-crystallisation strategies for years to come.

‘We have been able to make a transition from basic and very fundamental research on “molecular dating” and structural chemistry, to new materials that may have wide-ranging practical applications coupled with considerable environmental benefits,’ concludes Aakeröy.