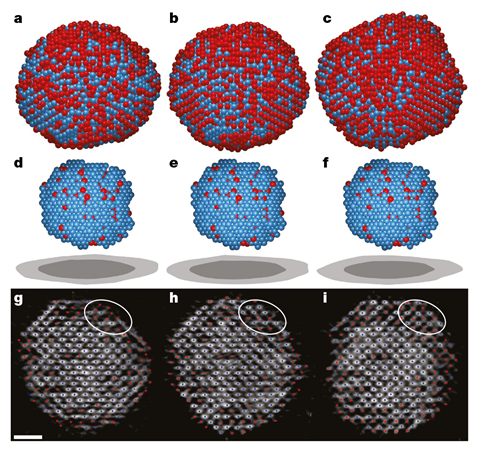 Capturing nucleation in 4D at atomic resolution gave the UCLA team unprecedented insight into the process. Here 3D atomic models (a–c) show iron in red and platinum in blue as a nanoparticle forms over nine, 16 and 26 minutes. The platinum-rich core (d–f) remains unchanged over this time. The light and dark grey projections underneath show the whole nanoparticle and the core. The internal atomic layer of the nanoparticle is shown at the three times (g–i). (Scale bar 1 nm)

For the first time scientists have watched iron and platinum atoms crystallise in 4D – not only observing their arrangement in space but tracking them over time. Their observations clash with classical nucleation theory, which describes the early stages of a phase transition, adding to growing evidence that the textbook theory is outdated and imprecise.

Every phase transition – from cloud-forming water droplets to the protein aggregates that have been linked to Alzheimer’s disease – starts with nucleation. According to textbook nucleation theory, atoms or molecules cluster together to form perfectly spherical nuclei, which begin to grow when they reach a certain critical size. A sharp boundary separates the old and new phases.

But what Jianwei Miao from the University of California Los Angeles, US, found when he looked at a solid-to-solid phase transition in an iron–platinum alloy in full atomic resolution for the first time was very different. His team discovered that nuclei are neither spherical nor have a sharp interface. Instead, after tracking more than 60 nuclei the team came to the conclusion that they came in all shapes and sizes. Each nucleus has a diffuse interface surrounding a stable core. ‘We found the smooth interface [between the core and the bulk] can actually reduce the energy barrier to phase transition,’ Miao explains. Rather than growing steadily, the team saw nuclei shrinking and growing again or even dividing.

‘Our experiment clearly shows the classical theory is not adequate to describe nucleation at atomic scale,’ says Miao. ‘We were very, very careful [with our data analysis] because it’s a big claim. For this experiment, I had a two people independently do the data analysis.’

The scientists’ data comes from atomic electron tomography (AET) images. Similar to cryo-electron microscopy, the sample is tilted to reconstruct a 3D image. It allowed the team to image the exact same atoms nine, 16 and 26 minutes after heating the sample to 520°C – the temperature at which iron–platinum nanoparticles transition from a disordered cubic to an ordered tetragonal phase.

‘I think it’s very exciting,’ says Melissa Santala who studies phase transformation kinetics at Oregon State University in the US. ‘The microscopy technique is really pushing the type of detailed information that we get about materials.’

Santala says it’s not surprising to see classical nucleation theory fail at atomic scale. ‘It is not really designed for that.’ Nevertheless, it prevails in undergraduate textbooks and forms the mental framework for many researchers, says Hanna Vehkamäki, an aerosol physicist from the University of Helsinki, Finland. ‘Unfortunately, in very many applications, we have nothing better.’

Solid–solid transitions like the one studied are particularly important for researchers developing new materials, Santala says. ‘You have to understand [nucleation] in order to gain finer control over their structure and properties.’

While AET is not suitable for studying other phase transitions – such as liquid to solid – Miao says that all evidence indicates the conclusions are general. ‘If they could apply their technique to ice nucleation that would be a massive, big breakthrough, because we are lacking microscopic understanding of the process,’ Vehkamäki says. ‘We could be talking about something that would affect weather and climate prediction in a very significant way.’