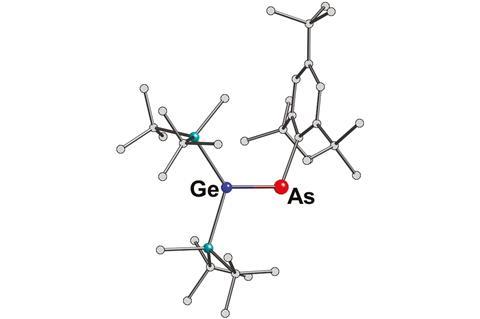 Arsagermene, the first isolable compound containing an As=Ge double bond has been reported by international scientists.

Homonuclear double bonds of heavier group 14 and 15 elements are well established but reports of heteronuclear heavy imines are scarce. Silicon forms stable double bonds with phosphorus, arsenic and antimony. However, further down the group insufficient stabilisation means that germanium and tin only form double bonds with phosphorus, and lead keeps to itself – only Pb=Pb double bonds are known. Arsagermenes have previously remained elusive, but with a little pushing and pulling Vladimir Lee from the University of Tsukuba, Japan, and colleagues have successfully produced the world’s first.

The reactivity that makes this compound so difficult to obtain is the reason it is so interesting – it contains two reactive sites: the As lone pair and the π-bond.

While other multiple bonds between heavy elements are prone to trans-bending and twisting deformation modes, the As=Ge double bond is essentially planar like the C=C double bond in an alkene.