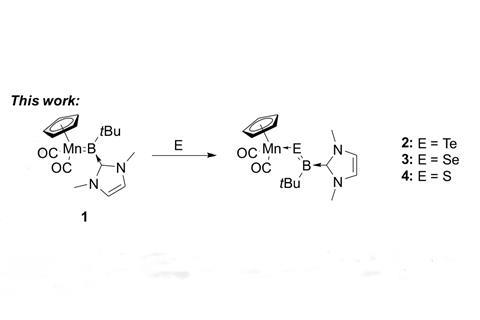 A rarity among rarities, the first molecule with a boron–tellurium double bond – and one of the few boron–tellurium compounds in existence – has been made by chemists in Germany.

Tellurium is one of the rarest elements in the Earth’s crust, as scarce as platinum. The heavy chalcogen is mostly used in iron alloys and as cadmium telluride in solar panels. But little is known about compounds featuring tellurium interactions with lighter main group elements.

A team led by Holger Braunschweig from the University of Würzburg has now discovered a surprisingly simple reaction to make the first double bonded boron–tellurium molecule: elemental tellurium was added to a manganese alkylborylene. The metalloid inserts itself between the manganese and the boron.

X-ray crystallography showed that the violet crystals’ boron–tellurium bond measures only 2.1Å, the shortest such bond found to date.