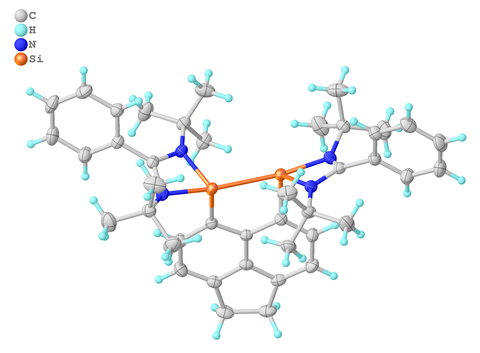 Chemists have broken the record for the longest silicon–silicon double bond ever made. This bond gives the molecule featuring this elongated connection ambivalent reactivity: it can either react as a double bond or as if it had two divalent silicon atoms.

At 2.623Å, the bis-silylenylacenaphthene derivative’s silicon–silicon double bond is 0.3Å longer than the previous record holder, and almost as long as the longest silicon single bond. The acenaphthene forces the silicon atoms into close enough proximity to form bonds. At the same time, the bond is lengthened by dative interactions to the silicon-bound bis-nitrogen groups.

The discovery comes almost four decades after chemists disproved the double bond rule, according to which heavier elements shouldn’t form multiple bonds – or if they do, they should be extremely unstable. But the strikingly black silylenylacenaphthene is inert, even in solution, as long as it doesn’t come into contact with air or moisture.

The researchers who made the compound were surprised by its unusual reactivity patterns. With other multiple bond molecules – alkenes, alkynes or ketones – the silylenylacenaphthene reacts like other disilenes, doing cycloadditions across the silicon–silicon double bond. But with an organometallic nickel, it forms a complex. This reactivity is typical for bis-silylenes, carbene analogues in which each silicon atom has two unshared valence electrons.