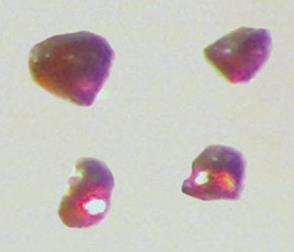 The first intermetallic double salt featuring negative platinum ions has been isolated by scientists in the US.

The caesium platinide hydride compound was discovered by materials researchers Volodymyr Smetana and Anya-Verena Mudring at the US Department of Energy’s Ames Laboratory in Iowa. It is the first compound, composed of three elements, to contain platinum in the –2 oxidation state.

The new material was isolated as a cherry-red crystalline solid, following the reaction of platinum with caesium metal and caesium hydride. Nuclear magnetic resonance, crystallographic experiments and computational studies confirmed the structure of the compound.