Not quite life on Mars, but there are lakes beneath the red planet’s glaciers 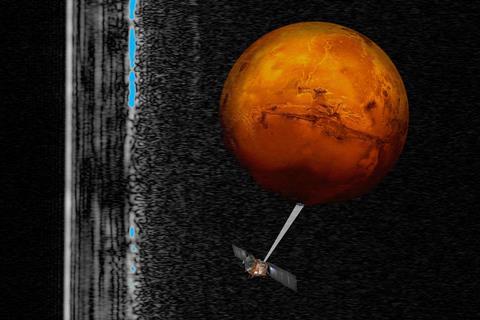 Artistic impression of the Mars Express spacecraft probing the southern hemisphere of Mars. Aradar cross section of the southern polar layered deposits is shown as a detail. The radar crosssection has been tilted 90°. The rightmost white line is the surface radar echo, while the lightblue spots along the basal radar echo highlight areas of very high reflectivity, interpreted asbeing caused by the presence of water.

Liquid water is hiding beneath Mars’ south pole glaciers, researchers reviewing radar data have confirmed. After decades of speculating – and finding signs of a watery history – this is the first compelling evidence for lakes on the red planet.

The team from Italy studied radio echo sounding data recorded between 2012 and 2015 by the Mars Express spacecraft. Its ground-penetrating radar detects boundaries between structures of different dielectric permittivity – a measure of a material’s electrical polarisation under the influence of an external electric field.

Since water’s permittivity is much higher than that of rock or ice, the scientists concluded that they must have found a liquid lake beneath Mars’ southern ice cap. They also realised that the radar signature matches that of ice-capped water in Greenland and Antarctica.

Despite having a temperature between –103 and –3°C, the water remains liquid, possibly due to dissolved salts and the pressure of the 1.5km-deep ice sheet covering it. Although the researchers only found evidence in a 20km-wide zone, they consider there to be subsurface water in other locations too.