Scientists have come closer to solving one of the mysteries of solvated electrons: free electrons that are stabilised in solvent cavities. In their archetypal ammoniated form, solvated electrons produce an inky blue electrolyte at low electron concentrations and a bronze metallic liquid at high concentrations. By obtaining the first ever photoelectron spectra of this system, the researchers suggest that there is a smooth transition between these states as the concentration increases – and not an abrupt switch like other studies had proposed. 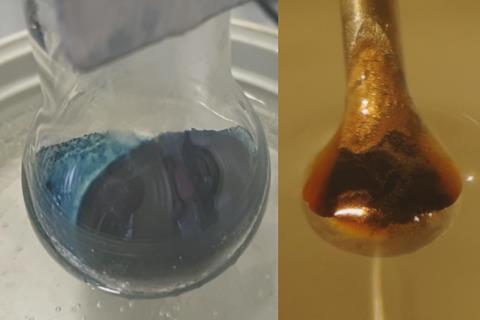 At low concentration, electron solvated in ammonia for a deep blue solution. At higher concentrations, the solution changes to bronze and the liquid develops a metallic character.

Solvated electrons form when alkali metals release their electrons into solvents such as liquid ammonia. Humphry Davy was fascinated by the bronze and blue colours, which he observed in 1808, shortly after he had discovered sodium and potassium. ‘You can go continuously from something that is in essence an ionic electrolyte to a liquid metal that has an electrical conductivity comparable to copper,’ says inorganic chemist Peter Edwards from the University of Oxford, UK, who discovered Davy’s unpublished observations in 1982. ‘How it transforms from the spin-paired state to the metallic state is still a deep question that no one has really resolved yet,’ says Edwards.

A team of chemists, led by Ondrej Marsalek from Charles University, Czech Republic, Bernd Winter from the Fritz Haber Institute of the Max Planck Society in Germany, Stephen Bradforth from the University of Southern California, US, and Pavel Jungwirth from the Czech Academy of Sciences, has now studied the energetic changes happening during the blue-to-bronze transition. Photoelectron spectra suggest that individual solvated electrons gradually coalesce as their concentration is increased, first forming spin-paired dielectons and then a metallic liquid.

‘What is really special is that they could record photoelectron spectra of bulk liquid,’ says Ruth Signorell from ETH Zurich in Switzerland, who has studied the metal transition in sodium–ammonia nanodroplets. ‘It’s experimentally difficult to achieve because liquid ammonia has a fairly high vapour pressure, and to record photoelectron spectra you need to be in high vacuum – these two things are not compatible.’ 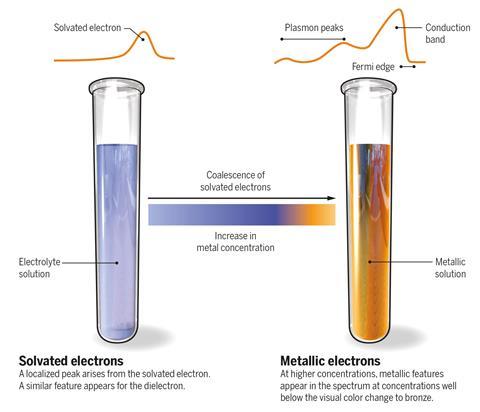 Jungwirth and colleagues’ solution was to shoot a tiny jet of alkali metal–ammonia solution – refrigerated to below –33°C – across a vacuum while bombarding it with synchrotron x-rays. ‘It’s all pretty nasty material,’ Jungwirth admits. ‘You end up with half a kilo of ammonia ice. And then you add the alkali metal, it’s potentially explosive and you’re doing it in a synchrotron, which is a very expensive device.’

Yet despite the team’s impressive technical achievement, Signorell says she is doubtful that the experiment really shows that the metal transition is gradual. She notes that there is a big gap in the measurements between the most concentrated and the second most concentrated solutions.

However, for Jungwirth, the study was mostly ‘preparatory work for what we actually want to do, which is to prepare metallic water’. For this, the team will need to add alkali metal to water, which usually results in an explosive reaction. If the researchers succeed, it would allow them to make a material that has been proposed to exist only at extremely high pressures.