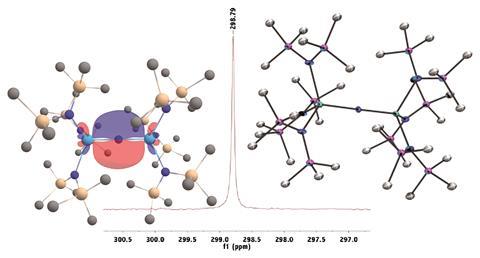 Scientists in the US have made the first stable molecular thorium nitride complex and examined its 5f covalency.

From nuclear energy to MRI machines, right down to the batteries in our smartphones, the f-elements – composed of the lanthanides and actinides – are becoming increasingly important. However, scientists’ understanding of the bonding in these compounds still lags behind that of transition metal complexes.

Investigating metal–ligand multiple bonds is one way to improve our understanding of the reactivity of these elements. While several molecular uranium nitride complexes, containing the U=N=U unit, have been isolated, stable thorium nitrides have remained elusive. Researchers from the University of California, Santa Barbara and University of Buffalo, New York – led by Trevor Hayton and Jochen Autschbach – have now produced the first. 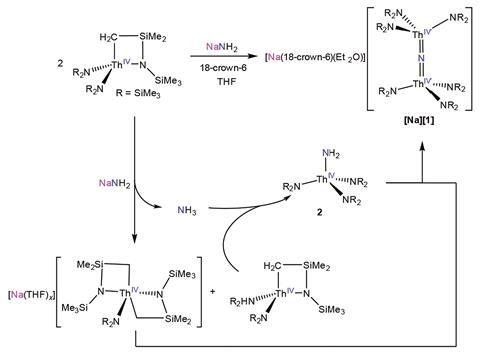 Addition of NaNH2 to a cold solution of a thorium metallacycle in tetrahydrofuran, followed by addition of 18-crown-6, afforded the bridged nitride complex after stirring for 24 hours

The team achieved this by reacting a strong base with a thorium metallocycle and a crown ether at –25°C. They then used 15N NMR spectroscopy to build up a picture of the interactions in the Th=N=Th unit, revealing the overall Th=N double bond character and the greater degree of covalency in this compound compared to the related oxo compound.

This study also marks the first observation of a 15N chemical shift for an actinide nitride, though 13C, 77Se and 125Te NMR spectroscopies have all been used in the past. The group hope to use this particular spectroscopy technique to investigate other actinide nitrides in the future.