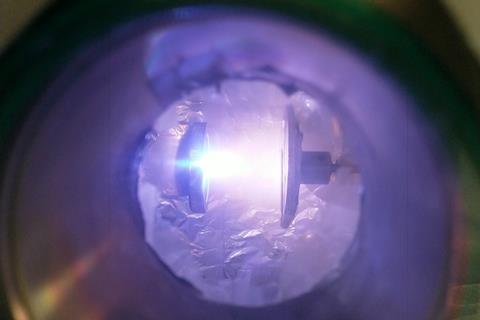 Pulsed laser deposition is used to produced the highly ductile glass. Highly energetic laser pulses are shot at the crystalline target on the left side of the image and the intense energy breaks down the crystalline aluminum oxide into purple colored plasma. The plasma cools down extremely fast to form a film of glassy (amorphous) aluminum oxide upon colliding with the substrate on the right side of the image

A new type of glass has been created that can be stretched and bent at room temperature without snapping. Thin films of amorphous aluminium oxide appear free of the brittleness usually associated with glasses and might one day find use in flexible and ultra-strong electronic devices.

A team led by Tampere University’s Erkka Frankberg and Lucile Joly-Pottuz from the University of Lyon, has created an aluminium-based glass that can bend and stretch at room temperature without breaking, even when put under high strain rates.

‘Almost all conventional glasses are based on silica – silicon and oxygen. But now we studied a glass that is composed of aluminum and oxygen,’ explains Frankberg. ‘Based on [our] results, it appears that actually there are glasses that can behave mechanically like a metal at room temperature. So, they can deform, stretch, bend and so forth without breaking – up to a certain point.’

Key to this pliability, is the dense packing of atoms in the material’s structure. ‘If you compare this aluminum oxide glass network of atoms to a silica glass network, the silica glass has a lot of empty holes and defects in the atom structure,’ says Frankberg. ‘These prevent the atoms from moving around so easily. But because in this aluminum oxide the atoms are more densely packed without defects, they can more easily switch places with each other, which is basically the requirement to achieve plasticity.’ 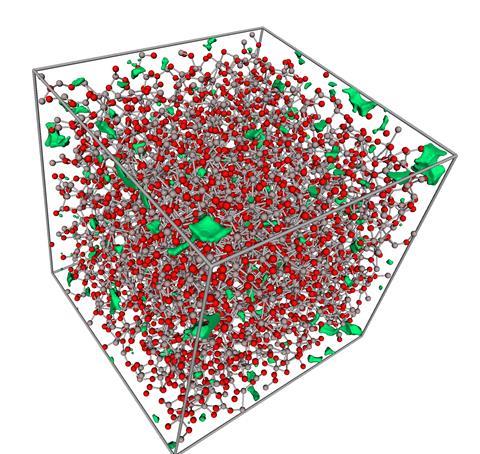 Supercomputer simulations on the atomic structure of amorphous aluminum oxide show that the atom network has very few flaws (highlighted in green), which makes the material extremely ductile and less prone to fracturing. Red atoms are oxygen, grey atoms are aluminum

‘Designing oxide glasses with intrinsic ductility is an enormous and important challenge in the field of materials science, since their well-known brittleness hinders many functional and engineering applications,’ says Morten Smedskjær, an expert on oxide glass chemistry based at Aalborg University, Denmark, who was not involved in the project. ‘[This discovery] thus challenges our view about what is possible in this material family,’ he adds.

Frankberg’s team used a pulsed laser deposition technique to force the aluminium oxide to form an amorphous structure, rather than a more regular crystalline arrangement. In this process, the aluminium oxide is first broken apart with a laser beam to form a plasma. This is then cooled down very quickly, so that the material doesn’t have time to crystallise.

The complexity involved in making the material will likely prevent it being used commercially in the near future, however. ‘As also acknowledged by the authors themselves, the technological challenge to produce the needed flaw-free samples, especially in large scale, remains significant,’ notes Smedskjær.

‘The work continues,’ says Frankberg. ‘This is the first discovery – the revelation that this is actually possible. But we still need to understand better the mechanism behind it.’ With greater knowledge about the fundamentals that give the material its high ductility, Frankberg hopes to be able to find other glasses with similar characteristics. ‘Then we could also improve the processing of the material by manufacturing technologies to be more implementable on a larger scale,’ he adds.