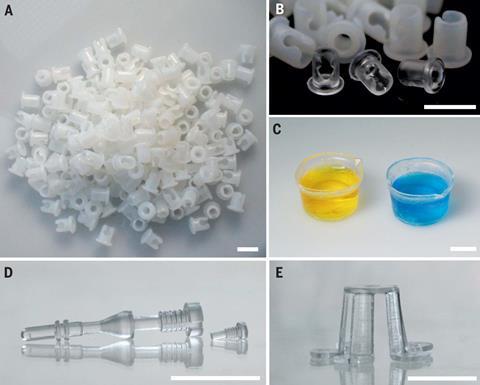 Fused silica glass offers numerous benefits as a material, but manufacturers often avoid using it because of the high temperatures required. However, researchers in Germany have now produced high quality glassware at far lower temperatures using injection moulding. Their technique could potentially have significant technical, economic and environmental benefits.

Silica glass is one of the oldest materials known, produced simply by heating grains of silicon dioxide until they melt. It has remarkable chemical stability, optical clarity and durability. In the 20th and 21st centuries, however, manufacturers have increasingly used polymer-based products, which often have inferior properties and have become notorious environmental contaminants. One reason is that many polymers can easily be shaped by injection moulding – heating the material until it softens before injecting it into a pre-formed mould. This usually occurs at 200–250˚C. By contrast, silica glass melts at around 2000˚C. Aside from the enormous energy demands ‘there are not too many mould materials that can sustain these temperatures’, explains Frederik Kotz of the University of Freiburg in Germany.

Everyday glassware usually contains additional chemicals. ‘We add soda, calcium – a lot of stuff like that – to reduce the melting temperature,’ says Kotz. ‘But it also affects properties like thermal stability, chemical stability.’ In precision glass manufacturing techniques, pure silica glass is generally produced at ultrahigh temperatures before being etched with hazardous chemicals such as hydrofluoric acid and flame polished to produce the desired shapes – although ultra-pure silica glass for optical fibres, for example, is usually produced by chemical vapour deposition. 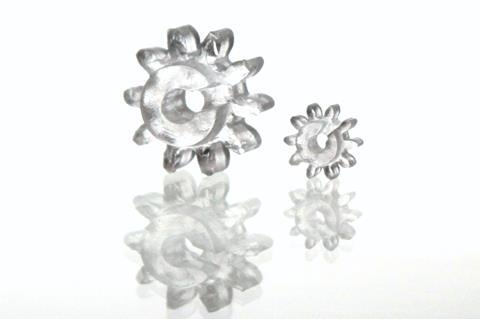 A potential alternative is powder injection moulding: a technique first developed in the 1950s and used today to produce billions of pounds worth of everyday goods ranging from metal spanners to ceramic sinks. Solid particles suspended in a liquid binder are injection moulded into the desired shape and allowed to set. The resulting object is then placed into an oven, causing the binder to evaporate and the particles to fuse together – a process called sintering. Several research groups had previously attempted to produce glassware this way, but with limited success. ‘You normally get a white piece of glass – it’s more a ceramic,’ says Kotz.

Kotz and colleagues decided to try using an extremely high concentration of ceramic nanoparticles. This presented a challenge: ‘You can find [ceramic nanoparticles] everywhere: in creams, in toothpaste – they behave as thickening agents,’ explains Kotz. ‘Of course, that’s not helpful if you want a really high amount well distributed.’ The researchers devised a method for keeping these particles solvated in a polymeric binder, producing a fluid that could be injection moulded into any shape. Some of the binder was then washed out and recovered, before the researchers heated the material to 1300˚C. This drove out the remaining binder and caused the nanoparticles to soften and merge. ‘It’s a thermodynamic effect,’ explains Kotz, ‘They’re close enough together, the surface area is super-high and when you slightly reduce their viscosity they reduce their surface area by moving together.’ The researchers made measurements which, they claim, showed that scientific quality glass components could be produced without further processing.

The researchers have produced hundreds of kilograms of material using their technique and are working towards production at multi-tonne scale. The precise energy saving remains unclear but the researchers are confident it exceeds 40%. Moreover, says Kotz, disposal of glass is easy. ‘Glasses are made from sand and you can grind them back to sand.’

‘Injection moulding offers an opportunity to make glass articles with a wide variety of different shapes,’ says John Mauro of Penn State University. ‘However, more details are required to understand the true potential of the new approach and compare the quality of the resulting glass articles to industry-standard high-purity fused silica products. Also, more work is required to evaluate the energy savings of the new approach compared to conventional vapour deposition and melt-quench techniques.’