Your textbooks and teachers probably told you that elemental fluorine, F2, is not found in nature. But now traces of it have been found in calcium fluoride minerals by German chemists, who suggest that it’s produced by uranium also found in the rock. 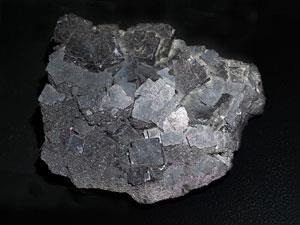 Fluorine is incredibly reactive, so although it is relatively common in the earth’s crust, it is normally found as fluoride ions in minerals. Fluorite, CaF2, is the most common fluoride mineral and the main source of fluorine for commercial uses. Some fluorite minerals are known as ‘fetid fluorite’, because they give off a characteristic smell when crushed. There are suggestions that fluorine gas is responsible for the smell, but the exact cause of the odour has remained a mystery.

Inspired by his background reading for a lecture course on inorganic fluorine chemistry, Florian Kraus from the Technical University of Munich discovered the story of fetid fluorite and decided to investigate for himself. He drove from Munich to a disused mine in Wölsendorf 180km away and picked up some fetid fluorite rocks called antozonite in a forest only a few metres from the highway.

Simply smashing the samples with a hammer released the smell, which Kraus says is very distinctive and unmistakably fluorine. He tested this by smelling pure F2, HF, OF2 and XeF2 – at very low concentrations and only very briefly.

Wanting more proof, Kraus looked for F2 using mass spectrometry, but could not find it and says it ‘must have reacted with parts of the mass spectrometer before we could detect it’. Kraus’ collaborators, led by Jörn Schmedt auf der Günne at Munich University, carried out 19F solid-state NMR on pea-sized samples of antozonite. They found a peak at 425ppm that corresponds to the range expected for difluorine.

But how does F2 – the most reactive chemical element – come to be in these rocks? As high-quality synthetic fluorite has been used as optical components in uses such as high-power lasers and space telescopes, it is known that it can be affected by radiation damage. Antozonite from Wölsendorf is known to contain uranium, so Kraus proposes that this is responsible. Beta radiation from uranium and its daughter nuclides strips fluoride anions of their extra electron. The resulting fluorine atom quickly forms a difluoride anion which is highly mobile. The anion loses an electron at a defect and forms difluorine – in some cases bubbles up to 200nm in size were seen with scanning electron microscopy.

‘Similar things have been done before, for example at Oak Ridge in the US they subjected a mixture of fluoride salts, including LiF, to radiolysis and generated fluorine, but that was man-induced,’ says Alan Brisdon, who works on fluorine chemistry at the University of Manchester, UK. ‘The analysis by NMR seems fine, although the identification by smell does harp back to a bygone age of chemistry!’ He adds that Kraus’s discovery will change many people’s perception of fluorine’s natural occurrence. ‘The opening line in many chemistry books’ chapters on halogen chemistry needs modification,’ he says.

Kraus suggests that the team’s discovery could be useful for making colour-changing dosimeters in long-term or high-dose radioactive environments, such as close to nuclear fuel rods. Kraus also hopes that solid-state NMR will be taken up geologists who want to study other minerals with gas inclusions.