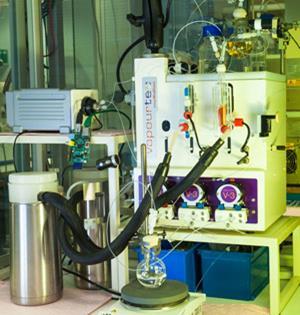 ‘This is a room temperature reaction without using precious metals,’ Ley stresses. ‘That’s pretty mild – and pretty general, we believe.’ The approach could help in drug manufacturing, reducing reliance on expensive metal catalysts that can contaminate active pharmaceutical ingredients.

Other researchers have also made carbon-carbon bonds without commonly-used metal catalysts like palladium from boronic acids and other reactive organic molecules, however these methods usually require high temperatures.2 Few others would have considered diazo compounds to partner the boronic acids, but Ley’s team’s long experience in flow chemistry suggested they could use them safely. They pump small volumes of a dilute hydrazone precursor solution over activated manganese dioxide at high pressure in a cooled, contained system. The diazo product then flows directly into room-temperature flasks containing boronic acids.

‘Producing diazo compounds in batch mode on [large] scale is normally forbidden,’ Ley explains. ‘But if you make small quantities continuously and immediately use them, as we do, you have the opportunity to discover new chemical reactions.’

The new coupling reactions’ initial product is also a boronic acid, which can then react further with diazo molecules, as Ley’s team noticed in its preliminary studies. ‘We then said, “A-ha!”, can we do this by design, so that we can then vary the coupling reagent to make more complex systems?’ Ley recalls. The scientists therefore have now extended the process up to three different diazo species added to a single boronic acid to build four new carbon–carbon bonds. 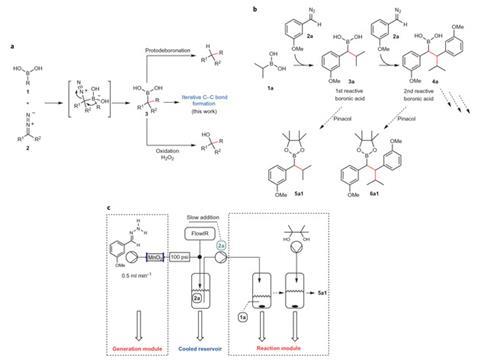 Mimi Hii, whose Imperial College London team researches continuous flow processes in organic synthesis, calls the study ‘excellent’. ‘This is a perfect demonstration of how an understanding of reaction engineering and reaction rates can achieve not only the desired outcome, but also to do this in a controlled and safe way,’ she says. ‘The versatility of the iterative methodology allows fairly complex structures to be assembled quickly via combining a number of synthetic routes.’