After five years of dogged pursuit, researchers in the US have finally observed and characterised the elusive intermediates that are central to one of the most important reactions in synthetic organic chemistry. The finding could lead to improved ways of carrying out the reaction. 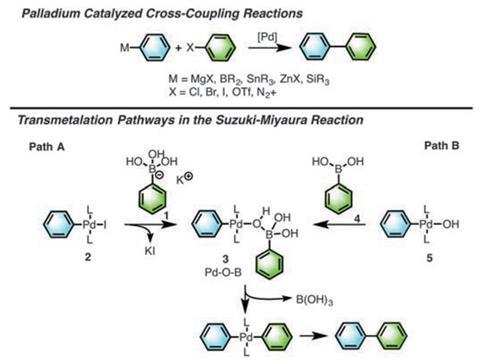 The University of Illinois team characterised transmetalation species such as 3, the missing link between the starting reagents and the diorganopalladium intermediate (bottom middle) that is known to afford the cross-coupling product

Suzuki–Miyaura cross-coupling is a ubiquitous method for creating new carbon–carbon bonds. The reaction involves coupling of an organoboron species with an organic halide, mediated by a palladium catalyst and a base. But despite the reaction’s importance, no-one had experimentally shown the structure of key intermediates involved in the crucial ‘transmetalation’ step, where the two participating carbon residues are bridged by a boron, oxygen and palladium, prior to the forging of the new carbon–carbon bond.

Now, Andy Thomas and Scott Denmark of the University of Illinois, Urbana, have achieved the feat. ‘People suspected what this intermediate looks like – but it has never been “seen”,’ says Denmark. ‘Curiously the hypothesis has jumped straight into textbooks without having been dignified by experimental verification.’

The direct observation of the intermediates was made possible by two things, says Denmark. The gritty determination of Andy Thomas, who spent five years tenaciously hunting down this elusive entity, and the use of an apparatus called rapid injection NMR. Here, the relevant chemical species are introduced to each other at cryogenic temperatures inside the NMR machine – so the reactions can be monitored in real time and the intermediates can be identified.

The results showed that there are in fact three versions of the transmetalation intermediate, depending on reaction conditions. ‘One of the intermediates that we have structurally and kinetically characterised is what had been speculated,’ says Denmark. This has a boron:palladium stoichiometry of 1:1.

A second intermediate complex has two palladiums to one boron. The formation of this intermediate had not been speculated. A third version was especially surprising. ‘This has a stoichiometry of 1:1, but here the boron is only 3-coordinate, as opposed to 4-coordinate in the “activated” intermediate,’ says Denmark. This is somewhat eyebrow-raising because in this state the boron is electronically neutral, in contrast to the formal negative charge of the 4-coordinated boron, which provides the punch for activating transmetalation. ‘While the 3-coordinate intermediate achieves transmetalation more slowly, the fact that it does so at all is intriguing and unexpected,’ says Denmark.

Denmark believes that the new mechanistic insights have the potential to lead to improved ways to execute the Suzuki–Miyaura reaction.

Guy Lloyd-Jones, of the University of Edinburgh in the UK, says the new work is ‘an outstanding contribution to mechanistic understanding in catalysis science, providing definitive identification of a long sought-after transient intermediate in the ubiquitous Suzuki–Miyaura coupling’. Lloyd-Jones adds: ‘A powerful synergy of rapid injection NMR, rigorous characterisation of fragile intermediate complexes and careful kinetic correlations were pivotal in this ambitious, elegant and unrelenting study.’