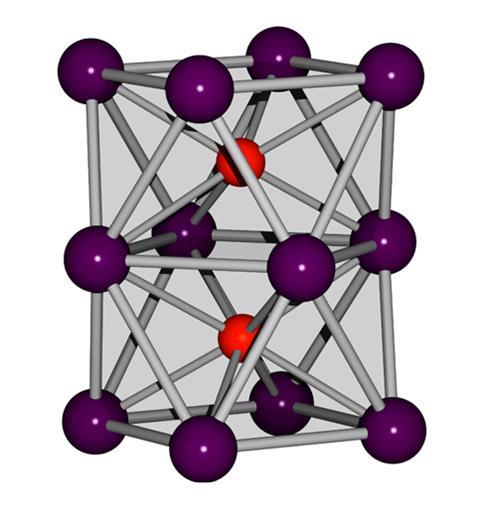 The structure of FeBi2. Bismuth atoms are purple, iron are red

Scientists in the US have synthesised the first ever iron­–bismuth binary compound. The team, led by Danna Freedman of Northwestern University in Illinois, says that compounds like these could be key as they attempt to create new magnetic and superconducting materials.

A major hurdle the researchers had to overcome is the two metals’ extraordinary immiscibility. Even at 1600°C – a temperature at which both elements are molten – only 0.16% of the bismuth will dissolve into the iron.

However, by subjecting mixtures of bismuth and iron to pressures over 30GPa, similar to that experienced at the centre of the planet Mars, and using an infrared laser to heat the samples to temperatures above 1200°C, the team was able to successfully produce iron–bismuth crystals. The intermetallic material features the first ever known example of iron–bismuth bonding in the solid state.

Once the iron–bismuth compounds have been generated, the pressure can be reduced to just 3GPa – roughly 30,000 times the Earth’s atmospheric pressure – before the material decomposes.