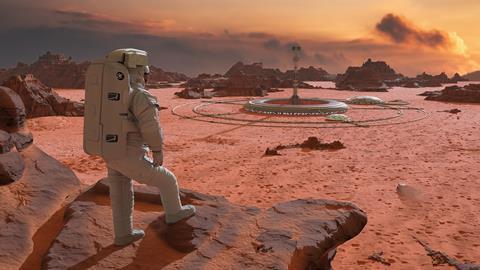 Electrolysis of water to produce oxygen to breathe on bases on the moon or Mars could be up to 11% less efficient due to their lower gravities compared with the Earth, UK researchers have found. The finding supports the viability of the approach but it highlights the importance of limiting the effects of low gravity in the development of such systems for future missions.

Gravity on the moon and Mars is only 0.16g and 0.37g respectively, compared with the Earth’s 1g. Scientists knew that electrolysis of water is less efficient at zero-g, owing to oxygen bubbles being less buoyant and collecting around electrodes. However, technical challenges had meant that no one had studied the process at micro-g levels between 0.01g and 1g, and therefore how lunar or Martian gravity would affect oxygen production.

Now, a team led by Mark Symes at the University of Glasgow, UK, have conducted water electrolysis experiments within this range for the first time. They used a centrifuge system on board freefall flights with the help of the European Space Agency’s Fly Your Thesis! programme. 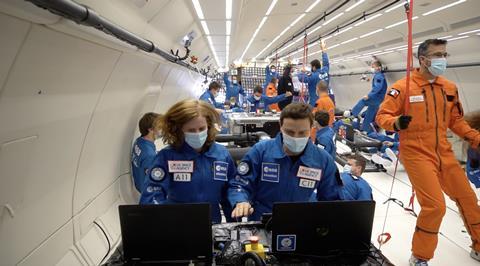 ‘The extent of this reduced efficiency at lunar gravity is comparably mild: maybe only 11% or so less efficient,’ says Symes. ‘That means electrolysis of water could be a viable route to producing oxygen on the moon, at least in terms of efficiency.’

The centrifuge system, which included an electrolysis cell, can be spun to simulate gravitational forces anywhere from 1g to 8g. The researchers mounted this system inside France’s Novespace’s Zero-G airbus, which flew in parabolic arcs to bring the system – and the researchers – into zero gravity. The centrifuge was then spun to simulate gravitational forces between 0.01g and 1g.

The results suggest that mitigating the 11% drop in the efficiency of oxygen production under lunar gravity would require around 1% more power to match production on Earth. ‘It is important to know what sort of performance and efficiency can be expected as every watt of power needs to be budgeted for on space missions,’ says Symes.

‘The work demonstrates once more that electrolytic oxygen production on the moon and Mars is feasible,’ says Katharina Brinkert, who studies oxygen production in microgravity at the University of Warwick, UK. ‘However, challenges regarding the required additional energy input due to hindered gas bubble desorption remain.’

Symes suggests solutions to overcome the effects of low gravity could include structuring electrodes so that bubbles detach more easily or simply shaking the electrolyser to dislodge bubbles. ‘Our cell is by no means optimised, so more realistic cells definitely need to be built and tested,’ adds Symes.

Testing and optimising electrolysis systems could now be much quicker and easier thanks to the results that the team obtained. As a benchmark, it means oxygen evolution on the moon or Mars can be predicted without always taking costly and time-consuming parabolic flights. It would just require ground-based high g centrifuge experiments and extrapolating the results to lunar and Martian gravity levels. ‘This is particularly beneficial given the long-term testing requirements for oxygen-evolving systems before their application on the moon and Mars,’ adds Brinkert.