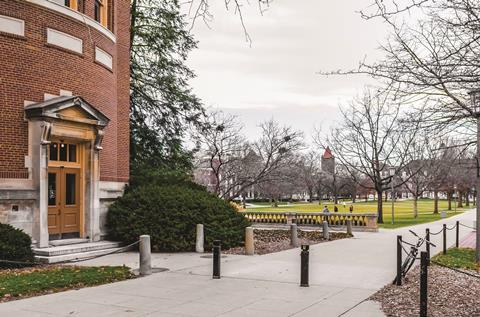 The University of Illinois, Urbana–Champaign is among those universities that have been hit by a political battle over the state’s budget

Chemistry departments in Illinois are entering perhaps their toughest semester ever, facing budget shortfalls arising from a second year of stopgap state-level educational funding. Universities are among those caught in the crossfire of an ideological battle, with politicians’ inability to agree on expenditure hitting those with few other funding avenues hardest.

Chicago State University (CSU) has seen ‘massive layoffs of administration, support personnel and faculty’, says Edmundo García, chair of CSU’s department of chemistry, physics and engineering studies. CSU gets around 40% of its budget from the state, while income from tuition fees paid by its typically inner-city students, many of whom are African American, are also falling. This is partly because state subsidies for those in financial need went unfunded for several months, but also because students are worried and looking elsewhere. First year undergraduate enrolment at CSU for 2016–2017 is currently down 50% compared with 2015–2016.

‘We lived from July 1st 2015 until April 2016 without 40% of the money we need to run the school,’ García says. ‘We let go almost all of our part-time faculty and full-time lecturers. We were mostly only able to retain tenured and tenure-track faculty. We’re in survival mode until this is resolved.’ The situation has driven at least two faculty members his department had retained to leave, García admits.

The crisis began in June 2015 when Republican governor Bruce Rauner vetoed a state budget devised by the Democrat-controlled Illinois government. Rauner said the overall budget would add $4 billion (£3 billion) to Illinois’ existing debt, variously estimated to be around $100–$300 billion. In April 2016 the opposing sides agreed a $600 million stopgap package for higher education, whereas the Democrat budget originally earmarked $1.7 billion. In June, the opposing sides agreed another $1 billion for higher education through to June 2017. 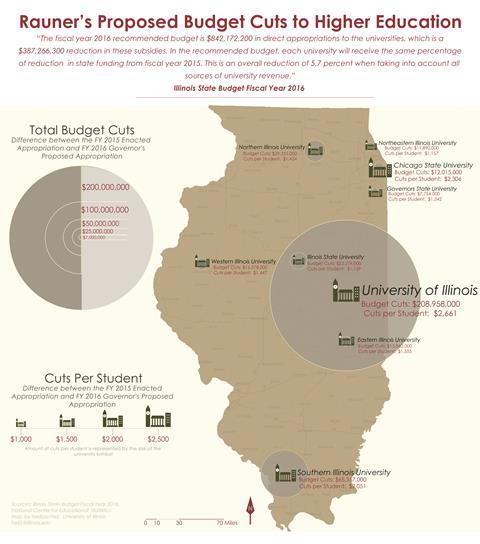 Eastern Illinois University (EIU) in Charleston, is fractionally better off than CSU, relying on state funding for a third of its budget. It has laid off many support staff, says Jonathan Blitz, an analytical chemist and president of the faculty union at EIU. 25 EIU faculty on previously recurring annual contracts have also been lost in the past two years. Meanwhile, the chemistry department is questioning the affordability of using silver nitrate in gravimetric analysis teaching experiments, Blitz reveals.

The crisis drove Michael Menze, a former EIU biological scientist working with biochemist Mary Konkle also at Eastern, to move to the University of Louisville, Kentucky. ‘They got a large National Science Foundation grant last spring together and now have to collaborate across state lines, rather than across buildings,’ explains Blitz.

The University of Illinois, which has campuses in Chicago, Springfield and Urbana–Champaign, has suffered less thanks to a greater diversity of funding sources. Greg Girolami, head of Urbana–Champaign’s chemistry department, says that research and teaching has been unaffected. ‘We are examining ways to achieve savings, possibly by not filling openings in non-faculty positions if there are other ways we can cover the duties,’ he says. Faculty and non-unionised staff have had no salary increases over the last two years, which Girolami calls ‘troublesome’.

Hopes that the situation will be resolved in the November US elections are tenuous. Rauner is not up for re-election, but the entire Illinois House of Representatives and most of the State Senate is. Together, the House and Senate can override Rauner’s veto. ‘The House is a couple of votes short,’ Blitz highlights, and if the Democrats gain seats, they could force their budgets through. Illinois income taxes may be raised after the election, says Girolami, which ‘would certainly help’.