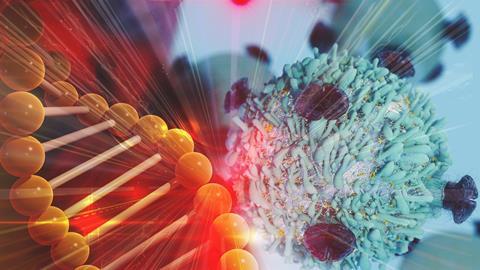 Sarah Houlton charts the evolution, challenges and opportunities of cell and gene therapy

Since the first human gene therapy trial was carried out nearly 30 years ago, on children with severe combined immunodeficiency due to adenosine deaminase deficiency (ADA-SCID, also known as bubble baby syndrome), there have been several product approvals – and a lot of optimism, despite the challenges. According to Research and Markets, more than 2200 clinical trials are under way, and the market is predicted to reach $363 million (£271 million) by 2020. Gene therapy now promises potentially transformative therapies for many forms of cancer, plus conditions such as haemophilia and a multiplicity of rare diseases. 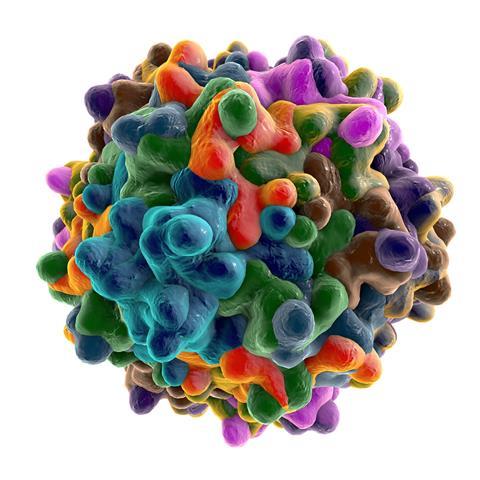 The field has attracted more than $600m of venture capital investment in the past five years, and has been a big focus of UK investment. Indeed, Innovate UK predicts that by 2035, the country could have a 15% share of global activity in cell and gene therapy, with $10 billion of revenue and 18,000 jobs. As of June 2017, there were 59 cell and gene therapy trials active in the UK. Ten were for in vivo gene therapies.

At the heart of the excitement is that a successful treatment could provide a life-long cure. ‘Gene therapy requires that the gene, however it is introduced, takes over the cellular machinery of gene expression,’ says John Rasko, head of the department of cell and molecular therapies at Royal Prince Alfred Hospital in Sydney, and current president of the International Society for Cellular Therapy. He describes 2017 as the ‘watershed’ year, with the approval of Kymriah from Novartis for acute lymphoblastic leukaemia, and Yescarta from Kite (now part of Gilead) for diffuse large B cell lymphoma.

Both of these products are CAR-T therapies, where cells are genetically modified outside of the body and then given back to the patient. In contrast, in vivo gene therapy involves delivering the new genes directly to the patient, usually via a viral vector that uses the virus’s innate ability to integrate new DNA.

Much of the work thus far has been with adeno-associated viruses, or AAVs, but lentiviruses are also gaining attention. Indeed, Kymriah is made using lentiviral vectors from UK-based gene therapy specialist Oxford Biomedica. As well as its in-house projects, the University of Oxford spin-out has a string of development and supply deals, most recently with Axovant for a potential treatment for Parkinson’s disease.

Some in vivo products are already available. But the path to market – and staying on the market – is a challenge. The first gene therapy to get approval in either Europe or the US was UniQure’s Glybera, for the rare lipoprotein lipase deficiency. Approved in Europe in 2012, it was withdrawn five years later. 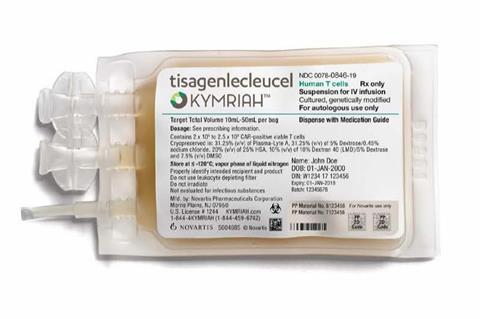 In August 2017, Kymriah (tisagenlecleucel) became the first US FDA-approved treatment that included a gene therapy step

‘Glybera was only used to treat one single human, in Germany, at cost of $1m for a single treatment. It was a medical and scientific partial success, but a commercial disaster,’ Rasko says. ‘The lack of patients made it impossible for the company to meet its post-approval regulatory requirements.’

There have been more successes since, however. Spark’s Luxturna, for example, was approved last year to treat an inherited retinal disease that causes blindness, the first in vivo gene therapy to get the go-ahead in the US. And Strimvelis, developed by GSK and recently transferred to Orchard Therapeutics, gained European approval in 2016 to treat ADA-SCID.

Oncolytic viruses represent another form of gene therapy. ‘Amgen has approval for a treatment called Imlygic in melanoma, but they are very ambitious in expanding it to other different cancers,’ Rasko says. ‘A whole host of other companies and academic investigators have been studying the use of live viruses to improve the immunogenicity of cancers.’

The novelty of these approaches means regulatory discussions will be a challenge, according to Miguel Forte, CEO of Zelluna Immunotherapy in Norway. ‘Because the idea of gene therapy is to give a long term therapeutic effect, regulators have to take decisions with limited medium to long-term data on something that will hopefully have a long term impact,’ he says. But, he adds, as regulators on both sides of the Atlantic become more familiar with the concept of gene therapy, they are more prepared to support it. 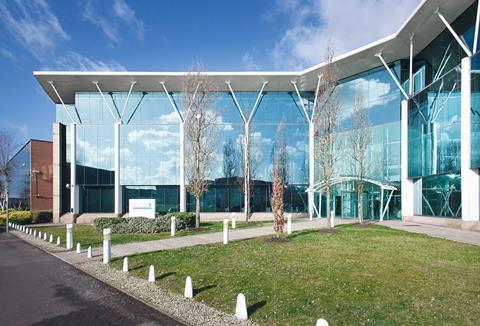 Oxford BioMedica announced at the beginning of June that it has entered into an exclusive worldwide licensing agreement with Axovant Sciences to develop and commercialise OXB-102, a gene therapy developed by Oxford BioMedica for Parkinson’s disease using the LentiVector platform

Once approved, gene therapy products will always be expensive to make, and therefore to supply. ‘We preach health economic analysis to understand the disease, understand the target product profile, and understand the likely reimbursement,’ says Keith Thompson, CEO of the UK’s Cell and Gene Therapy Catapult. Trials must be designed to clearly differentiate from standard of care, he says, and give a benchmark for how low the cost of goods will need to be. ‘This will never be as low as small molecules, or even biologicals.’

Innovative payment approaches will be required, Forte says, and the answer may be in annuities, and a payment while the effect lasts. ‘Most people don’t buy a house in cash, they spread the cost of the house along with the benefit from the house,’ he says. ‘I think we need to start considering payment models that link the investment to the spread of the benefit.’

Joe Tarnowski, senior vice president of chemistry, manufacturing and controls biopharm R&D at GSK, believes it should be possible to bring the cost of these therapies down into a similar range to an annual regime of a monoclonal antibody. ‘I think that brings good value for money,’ he says.

Aside from the technical challenges and the sheer cost of the products there is another challenge in getting the products to the market – getting them made. There is a worldwide shortage of capacity to meet the demands of academic researchers and biotech companies for clinical-grade viral vectors. Significant investments have been made in the UK to give the country a head-start in attracting gene therapy development. 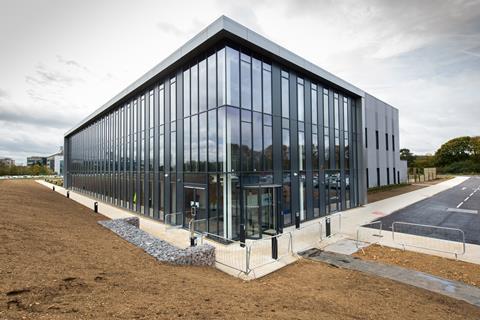 The Cell and Gene Therapy Catapult (CGT Catapult) opened a manufacturing centre earlier this year. It will provide the UK with the manufacturing facilities needed for large scale cell and gene therapy clinical studies and commercialisation, in line with Good Manufacturing Practice (GMP) standards

‘A lot of small and medium enterprises have been frustrated at having to wait in line and compete with the highest bidder to get their therapeutics manufactured,’ Rasko says. ‘But I’m confident that in the next few years there will be an oversupply of gene therapy, which means the price will come down.’

The UK is now fairly well served with small-scale facilities to produce material for clinical trials, but scaling up remains in short supply, and the Cell and Gene Therapy Catapult’s government-backed incubator in Stevenage, inaugurated in May, is designed to fulfil some of this demand. According to Thompson, there are some real bottlenecks, particularly around viral vectors.

I’ll be telling my grandchildren 2017 was the year gene therapy came of age, and we realised that we can cure human diseases

‘When we first started designing that in 2013, I don’t think it was widely recognised that there was going to be a crunch point in viral vectors,’ Thompson says. ‘Vectors for transformation of cells for CAR-T cells, and for both in vivo and ex vivo gene therapy, was going to become limiting.’ The Stevenage facility was designed for both viral vectors and cell therapies, with six individual production suites. Currently, two companies – Adaptimmune  and Freeline – are making viral vectors there, and two more, Autolus  and Cell Medica, are producing cell therapies. A second storey expansion is already being fitted out, and Thompson says it can’t be available quickly enough.

Venture capital investors don’t want to pay for bricks and mortar, and projects like the incubator are facilitating the formation of spin-out companies. ‘It’s also caused the re-shoring of some of this work,’ Thompson adds. He believes the UK is well placed to capitalise on gene therapy, not least because of a decade of strategic investment by the government. ‘I think we’ve got a good prospect of having a significant chunk of the global industry,’ he says. ‘Once you build these plants and get the supply chain going, they don’t move, and in fact what happens is they attract more and more to them.’

Technology advancements are also critical. Tarnowski says a batch of viral vector large enough to treat five or six patients can easily cost $1–2m from a contract manufacturer. For a properly powered clinical trial, it can cost many millions of dollars just to source the viral vector. 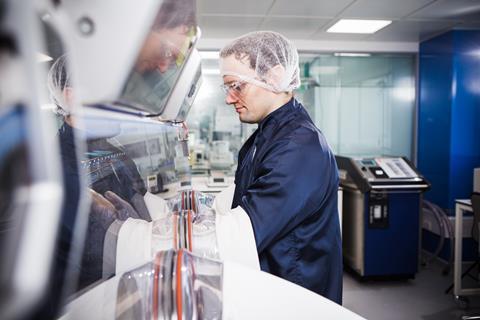 Backed by over £60m in government investment, the Cell and Gene Therapy Catapult manufacturing centre will ‘bridge the gap’ between scientific research and commercialisation of the medicines of the future to help bring cell and gene therapies to market

Adaptimmune’s head of process development Phil Bassett says scaling up is the main challenge for viral vectors. The situation mirrors that for monoclonal antibodies in their 1980s infancy. ‘Then, they were produced in roller bottles rather than bioreactors, and recoveries were in the milligrams per litre range,’ Bassett says. ‘Now you can routinely make antibody titres of 20g/l using platform processes and off-the-shelf technology.’

Scalable platform processes will be key to the success of gene therapies, too. Historically, their manufacture is based on adherent cell culture – cells that have to be attached to a surface to grow. ‘Viral vectors are produced via a packaging cell that expresses the different components and packages the virions together, and then secretes them into the media,’ Bassett says. ‘Those cells are grown adherently in flasks. Large-scale production requires greater numbers of larger flasks.’

Possible alternatives include a large bioreactor for adherent cells, or adapting the process so the cells can be cultured in suspension. ‘This would be more like a monoclonal antibody process, so you could potentially scale up to hundreds or even thousands of litres,’ he says.

Adaptimmune is developing a platform process for inserting different DNA into the viruses used to make its T-cell receptor products. The manufacturing process will remain broadly the same for each different viral vector. This will also speed up development times.

GSK is also developing suspension culture technology. ‘We believe we’ve come up with ways to make it reproducible, robust and with higher productivity,’ Tarnowski says. ‘Current viral vector technologies are so inefficient that they are driving the cost of products as well.’ Purification is also an issue – he says recovery can be as low as 20%, greatly adding to the expense.

Tarnowski believes the future is bright. ‘I think as we better understand the molecular and genetic basis of disease, the opportunities are going to open up even more broadly,’ he says. ‘I believe there’s a lot of enthusiasm for products as well.’ Venture capital companies are now investing heavily in the area, he says, reminding him of the early days of monoclonal antibodies, where investment shot up as the technology advanced.

Rasko is optimistic, too. ‘For 25 years we have been hoping the promise of gene therapy would be realised – and even Watson and Crick speculated about therapeutics based on genes,’ he says. ‘There are thousands of human diseases based on genetic abnormalities, and all of those may one day be susceptible to gene therapy, whether that be gene addition or gene editing. The idea is compelling. But it’s proving to be little more difficult than the idea! I’ll be telling my grandchildren 2017 was the year gene therapy came of age, and we realised that we can cure human diseases – not just rare ones but ones that might affect a significant percentage of the population.’