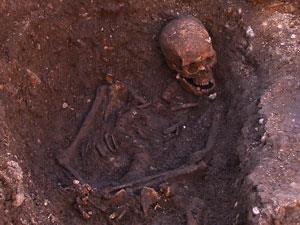 The hunt for the man behind the hunchback king goes on. In what will be the first study of its kind on a historical figure, scientists at the University of Leicester will lead efforts to sequence the genome of Richard III, the last Plantagenet king of England. They hope to learn more about him than just the colour of his eyes and hair – they hope to discover which conditions he may have been genetically predisposed to and even which diseases he suffered from.

Just over a year ago scientists confirmed that a skeleton found under a car park in Leicester was that of Richard III. They did this by building a case based on historical records, carbon dating, accounts of Richard’s deformity – now known to be a curvature of the spine called scoliosis – and an analysis of mitochondrial DNA of those related to Richard on the matrilineal side.

This new genetic analysis is being funded by the Wellcome Trust, Leverhulme Trust and Alec Jeffreys, the inventor of DNA fingerprinting. Turi King at Leicester, who is leading the project, says that she is particularly interested in looking at ‘whether or not Richard III was predisposed towards scoliosis’. The study should also offer some pointers on whether or not the portraits of him bore any resemblance to the man. No contemporary portraits of Richard exist – the pictures we have today were painted 30 to 40 years after he died.

She adds that whole genome sequencing will also let the team search for tell-tale genetic artefacts left by bacteria or viruses. Whole genome sequencing of Ötzi the Iceman, who died over 5000 years and was exceptionally well preserved as he died on a glacier in the Alps, revealed that he had suffered from Lyme disease. This is the earliest known infection of a human by this bacterium.

Leicester doesn’t have the facilities to sequence Richard III’s genome, so the team will be working with the University of Potsdam in Germany that has an archaeological sequencing lab. King will also be sequencing the genome of Michael Ibsen, whose mitochondrial DNA was used to confirm that the skeleton under the car park was likely to be Richard III. She is interested in finding out if Ibsen, who is the 17th generation nephew of Richard III, shares any specific genetic similarities with the king.

King notes that while other humans that died many centuries, or even millennia ago, including Ötzi, a Denisovan and Neanderthals, have had their genomes sequenced, Richard III is the first historical figure to be subject to this intense scientific analysis.  The end result of King’s work will be a freely available genetic resource that will be open to the public. She expects the project to take in excess of a year to complete.

Dan O’Connor, head of medical humanities at the Wellcome Trust, says that the team considered the ethical issues around this project, but considered that as Richard died so long ago there are few valid objections to pressing ahead. ‘By making this genome available to all, we will ensure that we can continue to learn about Richard’s past – both personal and historic – even once his remains have been interred.’