A battery whose power output can be increased by pressing it harder has been developed by researchers in China using a sponge coated with graphene as a pressure-sensitive cathode.1 The device could have myriad applications in wearable technologies, the team behind it says.

Responsive systems based on graphene have already been used to make devices that are controlled by external triggers like touch and temperature, including breathing monitors, smart skins and nanorobots. Now, a team led by Liangti Qu at the Beijing Institute of Technology in China have developed a battery that responds to pressure, producing a higher voltage the harder it is pressed. The device’s structure is inspired by classic zinc-air batteries, comprising a zinc foil anode, an electrolytic gel, ruthenium nanoparticles which catalyse the charging process, and a cathode. In this case, the cathode is a graphene-coated polyurethane sponge, which can be easily produced by soaking polyurethane pieces in a graphene oxide solution. The researchers found they could control the battery’s voltage and current output by varying the pressure on the sponge. 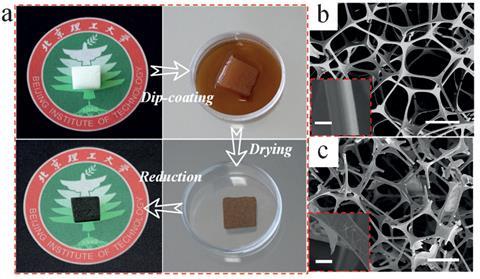 The idea came from the group’s previous work on responsive batteries, according to Qu. ‘We had recently prepared moisture-induced graphene generators,2 […] and decided to try polyurethane foams to design a power supply that could feel external stimuli,’ he says. Despite its flexibility, the battery has an outstanding resistance, he adds. ‘We can compress it over 700 times without any decrease in performance.’

Andrea Ferrari, director of the Cambridge Graphene Centre in the UK says a battery that can be controlled with pressure could turn out to be ‘very useful’. ‘It could be used in distributed sensor networks, new mobile devices, interactive displays […] really any gadget that can be controlled by the human touch,’ he explains. ‘The production of graphene foams is well established, and the soaking-drying-reduction approach [Qu et al.] looks scalable and promising,’ he adds.

Qu’s team is already thinking about industrial applications. ‘The soaking method is simple and scalable. We have already filed a patent proposal, and we are currently optimising the batteries,’ says Qu. They are also looking for alternatives to precious and expensive ruthenium. ‘Cobalt, nickel, and even metal-free materials like carbon nitride could help us lower the costs of a large-scale production,’ he adds. ‘We will be launching some [commercial] products in the near future.’