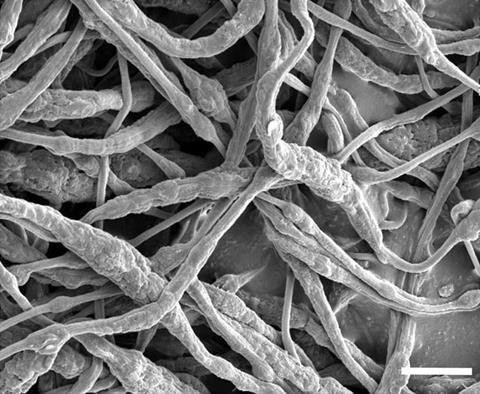 A new safety feature could solve flammability problems associated with lithium–ion batteries. The new device releases a flame retardant chemical into the battery, should it overheat or catch fire.

Safety issues surrounding rechargeable batteries came to worldwide attention last year when the latest Samsung smartphones started catching fire. Some airlines banned the devices on flights, and Samsung were eventually forced to recall 2.5 million handsets. Highly flammable chemicals are routinely used as electrolytes in lithium-ion batteries and can cause fires if the battery shorts, or sustains physical damage.

Now, a team of researchers from Stanford University, US, has developed a safety mechanism that could counter the flammable nature of the liquid organic electrolytes used in these batteries. The team’s work focuses on the batteries’ separator – a membrane which is used to stop a battery’s electrodes from coming into contact, while still allowing charge-carrying ions to move through the cell. In the new separator, a flame retardant phosphate is enclosed in an electrospun polymer casing. If the battery overheats, the casing melts and releases the phosphate into the liquid electrolyte, preventing or extinguishing any flames.

‘Generally, people need to make a trade-off between battery electrochemical performances – capacity, cycle life, etcetera – and flame retardancy of lithium ion batteries, as the flame retardants that are popularly used can significantly damage the batteries,’ explains Yi Cui, who led the research. ‘Using our “smart” separators, the batteries’ electrochemical performances will not be affected… However, once there is potential thermal runaway, the flame retardancy property will be activated, and nip the fire/explosions in the bud.’

The polymer casing melts at around 160°C, meaning that the fire-fighting phosphate is triggered at the early stages of combustion. Video footage of the separator in action shows electrolyte flames being completely extinguished within 0.4 seconds.

Jean-Marie Tarascon, of the College of France and director of the French research network on electrochemical energy storage RS2E, observes that electrospun separators have previously been developed for use in fuel cells. Describing the new combination of polymer shell and phosphate flame retardant as ‘conceptually innovative’, he notes that ‘more exhaustive characterisation’ needs to be carried out before the true impact of the device can be gauged.

Cui explains that his team are already planning the next steps for the technology. ‘In the future, we will try to scale it up and do the mechanical (nail penetration test or crush test) or electrical abuse (over charge, over discharge) tests in large format cells to make a further step towards practical applications.’