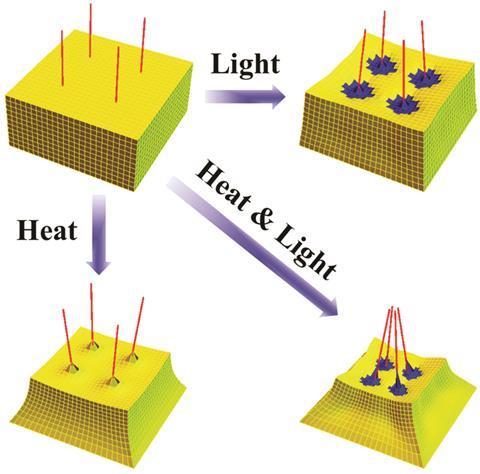 Depending on the stimulus, this composite material model can be used to grip and release objects

A team of scientists has computationally modelled a responsive material that shows finger-like motion while another research group has theoretically studied materials that can move like a snail.

The human body is a remarkable system, and scientists have tried hard to reproduce its combination of motion and stability for many years. One promising approach is to use systems composed of several different materials that can mimic bone and muscle structure and can respond to stimuli such as light.

Now, a team from the US have mimicked musculoskeletal actions by placing fibres (bone) upright into a gel (muscle) and modelling their response to heat and light.1 Light causes a local collapse of the gel around the photoresponsive fibres, meaning they fall inwards. Applying heat has the opposite effect as the thermoresponsive gel shrinks. The team could control individual fibres’ movement within a circular array to mimic a hand-like motion and to act like a gripper.

In a separate development, a China–US collaboration reports a related computational model examining wave locomotion, akin to snail or earthworm movement.2 Applying light pulses to a photoresponsive gel creates waves along its surface as it swells and de-swells. Varying the light intensity and creating waves in different directions determines the direction of the gel’s travel.

3D printing means that these model systems could soon become reality, and further study will focus on their refinement for practical applications.