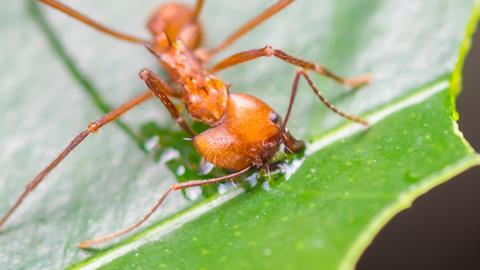 Ants, scorpions and crabs are able to deliver powerful bites and stings thanks to the arrangement of heavy metal and halogen atoms on their teeth, claws and stingers, researchers have found.

While larger animals use mineralised impact tools – such as antlers or teeth – smaller creatures need to deliver more power relative to their size so they use heavy element biomaterials (HEBs) to cut. These are protein-rich structures containing inorganic components made from zinc, manganese, bromine or copper. Although mineralised tools are stronger, HEBs have better abrasion resistance, allowing the animal’s tools to remain sharper for longer.

‘This is a favourable trade-off,’ explains Herbert Waite, a biomolecular materials researcher at the University of California, Santa Barbara, US, who wasn’t involved in the study. ‘As every carpenter and machinist knows, sharp tools require less energy to cut. Mineralised tools are adapted for rough work such as crushing and ramming; by contrast, the HEBs are used for cutting and puncturing.’

Now, a team led by Robert Schofield from the University of Oregon and Pacific Northwest National Laboratory, US, has taken a closer look to see how nereid worms, leafcutter ants, spiders, scorpions, salmon and crabs use HEBs. After collecting samples from frozen fish in supermarkets, mail-ordered bees and tarantulas and, in the case of leaftcutter ants, from specimen collected in the jungles of Guatemala and Trinidad, the researchers conducted a series of mechanical tests. They found that HEBs reduce the force, energy and muscle required by around 60% of that needed for mineralised tools. This allows small animals to deliver a far more powerful blow than would otherwise be possible at their size.

In addition to biophysics, the team used atom probe tomography to create a 3D nanoscale image of leafcutter ants’ mandibular teeth. Rather than finding the zinc clustered together in small metal deposits as seen in mineralised tools, the zinc was evenly spread along the teeth, with around half bound to proteins zinc-containing cations, 14% as free organozinc cations and the remainder as individual zinc atoms. This even distribution, the researchers suggest, has allowed ants to evolve sharper, more precise tools than biomineralisation.

The study also helps to identify the possible role of halogens in biomaterials. While investigating crab claws, the team detected a high concentration of bromine in the tips. Although the rest of the claw was three times tougher than the bromine-concentrated area, the tips were nine times more resistant to fractures, and 1.5 times harder than the rest of the claw. This, Waite argues, represents a ‘significant improvement in hardness without corresponding increases in fracture tendency’.

Although there is no definitive explanation for why this is at present, Waite adds, ‘this is beginning to sound more and more like the art of combining hard and soft steels in the production of a sharp and tough katana edge’ to keep the crab’s claws sharp and resilient.