From beehive to bone cement

Taking inspiration from honey bees, scientists in South Korea have incorporated a compound used in beehives into a new strong biomaterial with sustained antimicrobial properties. 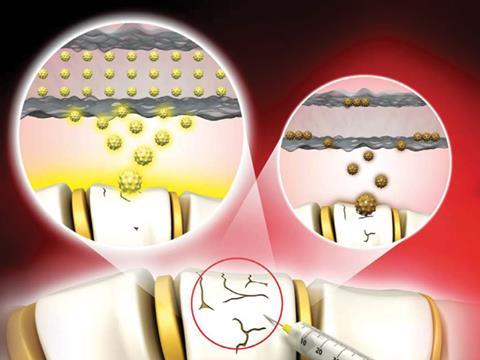 Bone cements have been used in surgery since the 1940s and work like a grout to fill the gaps between orthopaedic implants and bones. The most commonly used bone cements are made from a synthetic resin called poly (methyl methacrylate), or PMMA, and have recently been loaded with antibiotics, such as gentamycin, in an attempt to reduce healthcare related infections. However, the addition of antibiotics has raised concerns over antibiotic resistance, potential carcinogenic effects and the reduced mechanical strength of PMMA.

To overcome these potentially harmful limitations, a team led by Jeong Ho Chang at the Korea Institute of Ceramic Engineering and Technology, have developed PMMA bone cement loaded with caffeic acid phenethyl ester (CAPE). CAPE is an active component of bee propolis, a resin-like mixture collected by honey bees from various trees and buds and used to fill small gaps in the beehive. CAPE is thought to have antimicrobial, anti-inflammatory, antioxidant and anti-cancer effects and has already been approved for use in foods, drinks and cosmetics by the Food and Drug Administration.

The researchers were not only able to demonstrate that CAPE-loaded PMMA is an effective antimicrobial against Staphylococcus aureus, but it also has much better compressive strength than antibiotic-loaded PMMA. This impressive strength is thought to be due to a higher packing density caused by reinforced chemical bonding between the PMMA and CAPE through homogeneous loading. In contrast, conventional antibiotic-loaded bone cements are not uniformly mixed and have low loading efficiencies, so the compressive strength is similar to native PMMA. This also explains why CAPE–PMMA exhibits more controlled and sustained antimicrobial release compared to bone cement loaded with gentamycin.

Antoni Tomsia, a biomaterials expert specialising in treatments for bone defects and diseases at the Lawrence Berkeley National Laboratory, University of California, US, thinks that the incorporation of natural antimicrobials is a good idea. However, he emphasises that antimicrobial implants must go hand-in-hand with ‘provider hand hygiene, patient decolonisation efforts, or environmental decontamination, plus sterilisation, to prevent infections.’

Initial studies were carried out in rabbits and Chang believes that CAPE-loaded PMMA bone cement could be used for human clinical applications after therapeutic efficacy evaluation. ‘We are trying to discuss and work with a medical orthopaedics doctor and I think we can report the new clinical data in the near future,’ reveals Chang.