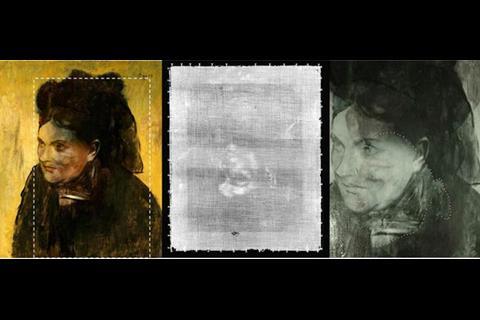 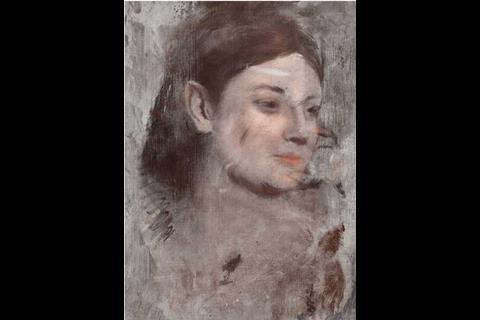 A false colour reconstruction using the x-ray data revealed a hidden portrait believed to be that of another model, Emma Dobigny

A portrait concealed beneath one of the impressionist artist Edgar Degas’ paintings has been reconstructed by researchers in Australia using x-ray fluorescence (XRF) spectroscopy.1

Although it has been known for some time that there is a different face, rotated 180°, hiding underneath Portrait of a woman, large parts of the figure are impossible to uncover using other methods because of the infrared-absorbing black paint used in the top layers. Researchers at the National Gallery of Victoria investigated the underlying pigments by firing a beam of high-energy x-rays at the painting, which are re-emitted at characteristic wavelengths by different elements. They used the resulting elemental maps to reconstruct a detailed, false-colour version of the hidden portrait.

Similar techniques have been applied in the past to reveal lost works of well-known artists. In 2008, a hidden portrait of a woman’s face was revealed beneath Van Gogh’s Patch of grass after XRF was used to map the presence of metals such as mercury and zinc within the pigments.2