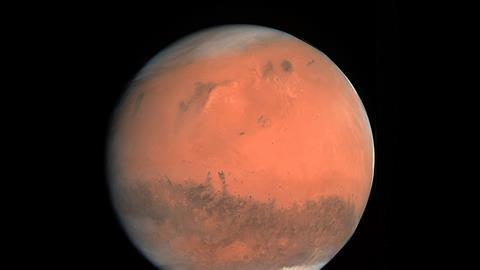 Insulating material could replicate the effects of Earth’s atmosphere on the red planet, warming it by 50°C

Silica aerogel, shown as particles (left) and a tile (right) has one of the lowest thermal conductivities of all known materials

Spreading a thin layer of silica aerogel over the surface of Mars could increase the temperature enough for crops to be grown, scientists have shown using models of the Martian climate. They say this intervention could transform the planet’s surface within decades, rather than the centuries thought necessary for large-scale planetary modification.

‘Silica aerogel is remarkably translucent, yet its thermal conductivity is one of the lowest of all known materials,’ says Robin Wordsworth, a planetary climate scientist at Harvard University. These gels consist of nanoscale networks of interconnecting silica clusters and are more than 97% air.

A coating just two to three centimetres thick could replicate the effects of Earth’s atmosphere on the surface of the red planet, allowing enough visible light for photosynthesis to pass through, while increasing the temperature of the underlying surface by 50°C. The models, which focussed on an ice-rich, mid-latitude location, suggested this would be enough to keep water liquid to a depth of several metres throughout the Martian year. The silica aerogel would also shield terrestrial lifeforms from ultraviolet wavelengths.

‘Our initial inspiration for this was a natural process on the Martian surface, the solid-state greenhouse effect,’ says Wordsworth. Light travels through carbon dioxide ice deposits, creating warmth beneath the surface which is trapped by the insulating snowpack. Heating leads to the explosive release of CO2, which generates dark spots observable from planetary orbiters.

However, over the majority of the surface the Martian atmosphere is so thin that it cannot muster a greenhouse effect sufficient to boost temperatures above the melting point of water. Previous ‘terraforming Mars’ theories proposed releasing carbon dioxide and water into the atmosphere from Martian reservoirs such as polar ice. However, research has revealed inadequate amounts of water and carbon dioxide on Mars to increase the temperature above the melting point of water. 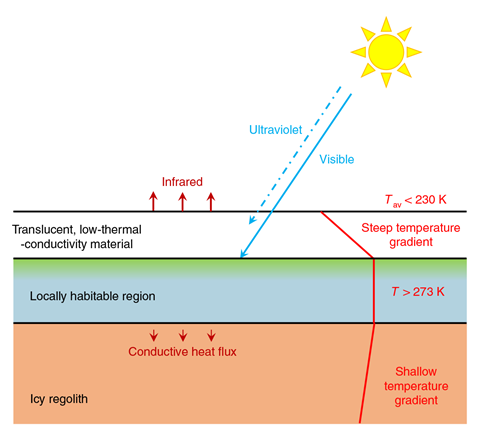 The ‘habitability concept’ for Mars Wordsworth and colleagues developed

Wordsworth envisions a mat of silica aerogel covering the surface in order to raise the temperature enough to grow basic forms of life, such as algae. Large pressurised domes could eventually be used for cultivating crops or sustaining habitable environments for humans. ‘The larger the area, the greater the volume, the more resistant it would be to diurnal and seasonal temperature changes,’ Wordsworth says. Silica aerogels are themselves fairly fragile, so would need to be reinforced or combined with other materials.

‘We don’t know how easily silica aerogel manufacturing techniques employed on Earth can be adapted to Martian conditions. Therefore, there’s a lot of work to be done to test this on Mars,’ comments Germán Martínez, planetary scientist and Mars habitability expert at the Lunar and Planetary Institute in Houston, Texas. However, he adds that ‘a big advantage is that this approach can be further tested in extreme environments on Earth today’.

Wordsworth says the team now plans to run field tests in regions such as the Atacama Desert in Chile and Antarctic dry valleys, as these are ‘the closest approximations that we have for the Martian surface’. He also suggests that synthetic biology might play a part in improving the habitability of Mars, taking advantage of organisms such as diatoms which utilise silica as a building material on Earth.