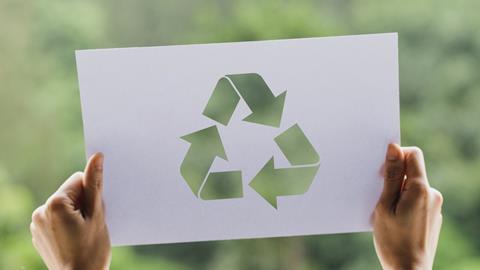 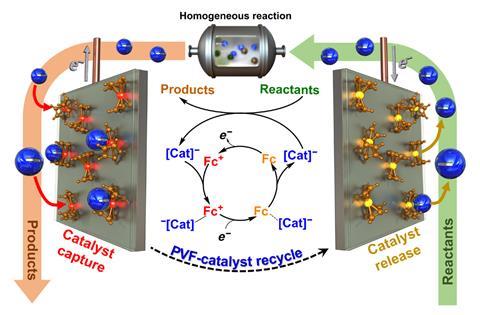 A new, more efficient process to electrochemically recycle some homogeneous catalysts has been demonstrated by scientists in the US. The technique, which reversibly binds the metal complexes to a polymer, can recover several industrially important and precious metal catalysts.

The most common recovery process for homogeneous catalysts is distillation, which is energy intensive and recovers just the metal, not its ligands. As chemistry seeks to move away from fossil fuels, electrochemical alternatives to thermal processes are highly desirable. The most common technique simply involves electrolysis in a reaction vessel to deposit the precious metal, but this requires high voltages and can collect unwanted ions as well.

Xiao Su and colleagues at the University of Illinois at Urbana–Champaign took a more subtle approach, coating the anode of their cell with a layer of a ferrocene metallopolymer. When a moderate voltage was applied across the reaction mixture, anionic catalysts were attracted to the ferrocene and selectively adsorbed onto it. ‘The polymer itself has organometallic units, and these have a soft charge transfer interaction with the whole catalyst complex… That’s what gives us the selectivity,’ explains Su. One of the key benefits is that the process does not tear the ligands off the precious metal. ‘We don’t go to voltages so high that the metal just deposits,’ Su says. When the potential was reversed, catalysts were desorbed from the polymer and could be re-used.

The researchers tested several industrial precious metal catalysts for reactions such as silane etherification, hydrosilylation and Suzuki cross-coupling, with promising results. ‘For the hydrosilylation reactions, we ran a techno-economic analysis that shows that it is commercially feasible,’ Su says. The researchers now intend to develop other polymers to selectively bind other anionic and hopefully cationic catalysts from solution. ‘The silver bullet would be to enable homogeneous catalysts to be used that are not used in industry today,’ Su says.

‘I think it’s very clever,’ says David Cole-Hamilton of the University of St Andrews, UK. ‘What’s very important about this is that they have chosen industrial catalysts… If you could recycle them as the catalyst rather than turning them back into metal as usually happens then that is an advance, provided the cost of doing the stripping is competitive.’ He cautions, however, that ‘most of the catalysts I’ve worked with are neutral, and they’re not going to be selectively removed by this method, so I think it’s a major advance but not a panacea’.