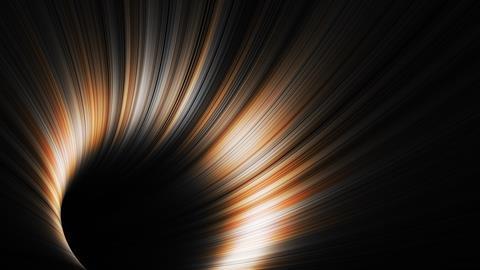 The Curtius rearrangement – a reaction discovered over 130 years ago – has given up a long guarded secret: it can proceed through an extremely rare case of heavy atom quantum tunnelling.

Although tunnelling through reaction barriers is commonplace in chemistry, ‘as organic chemists, we are trained to ignore this quantum phenomenon’, says Peter Schreiner, organic chemist and tunnelling expert from the University of Giessen, Germany, who wasn’t involved in the work. Quantum tunnelling is usually reserved for small particles like electrons and hydrogen atoms.

But a team around Manabu Abe from Hiroshima University, Japan, and Xiaoqing Zeng from Soochow University, China, has discovered a remarkable counterexample: a whole trifluoromethyl group tunnels in the Curtius rearrangement of trifluoroacetyl azide into trifluoroacetyl isocyanate. ‘This is a first clear-cut example of tunnelling solely by a group of non-hydrogen atoms,’ says Zeng. 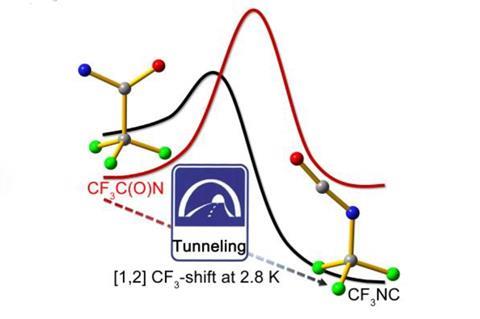 The group believes that the trifluoromethyl group is tunnelling, allowing the Curtius rearrangement to still occur at a distinctly chilly 2.8K. If so, this would be one of the biggest chemical groups ever recorded tunnelling

Nitrenes, reaction intermediates of the Curtius rearrangement, are usually extremely stable at temperatures below 30K (–243°C). At low temperatures, these intermediates have so little thermal energy that they simply can’t overcome the reaction barrier in a classical fashion.

Abe and Zeng decided to study trifluoroacetyl nitrene as scientists had not been able to conclusively prove its existence in previous experiments. They trapped trifluoroacetyl azide in ultra-cooled solid argon and zapped it with ultraviolet laser light to convert it into the carbonyl nitrene. But trifluoroacetyl nitrene surprised the team. Even at 2.8K (–270°C), it rearranges into an isocyanate – this ‘can only be accounted for by a mechanism of quantum mechanical tunnelling’, Zeng says. The team’s theoretical calculations suggest that it is the trifluoromethyl group – a real heavyweight with a molecular mass of 69 – that does the tunnelling.

Schreiner calls the study ‘excellent’, not only for revealing another instance of heavy atom tunnelling, but also for capturing an infrared spectrum of the elusive carbonyl nitrene. ‘This is pretty remarkable because hundreds of thousands of chemists have done the Curtius rearrangement and we always scribble down this intermediate as being important but nobody has actually shown that it does exist,’ he says.

Zeng and Abe also found that they could manipulate the tunnelling rate. ‘The tunnelling process becomes much slower in toluene and even stops in 2-methyltetrahydrofuran,’ Zeng says. Controlling tunnelling in the same way chemists can control reaction kinetics and thermodynamics could ‘open the door to a larger molecular universe as you can generate species that are not accessible by conventional means’, Schreiner concludes.