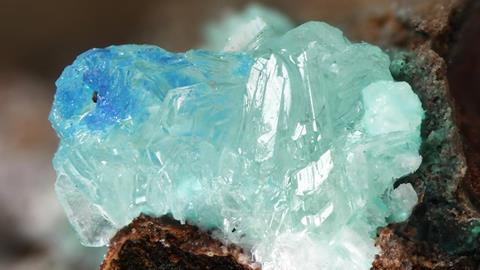 A catalogue has been created of 208 mineral species formed primarily due to human activities, which the researchers behind it argue can be used as evidence for the Anthropocene epoch on Earth.1

The history of our planet is written in its rocks – different strata document different eras. The newest of the Earth’s eras is the Anthropocene, an epoch proposed to relate to the time human activities have had a significant impact on the geological record. ‘Imagine a geologist coming back to Earth looking at a layer of sediment,’ says Robert Hazen of the geophysical laboratory at the Carnegie Institution for Science in Washington, DC. ‘You’d find rocks in the rock records – building materials etc – discovered by mineralogists that only arise through human activities.’

Together with colleagues at the University of Maine and University of Arizona, Hazen has documented a swathe of minerals which can be used to identify the so-called Anthropocene. Starting with the roughly 5200 minerals recognised by the International Mineralogical Association they catalogued 208 mineral species that have arisen on Earth only or primarily as a result of human activities. ‘All occurred during the last 200 years – a pulse [of minerals] that never appeared before,’ says Hazen. 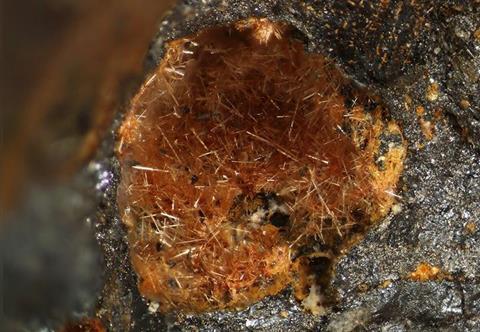 Nealite [Pb4Fe(AsO3)2Cl4•2H2O] is a mineral that is a result of human activity. This sample came from a slag site in Greece

Hazen and his co-authors say that human activities have affected the diversity and distribution of minerals in three distinct ways. The first is the mineral and mineral-like compounds created through by humans either directly or indirectly. Examples include yttrium aluminium garnet crystals in lasers, Portland cement or minerals indirectly created in unique human-created environments such as mine tunnels and dumps.

Supplementing this burst of new minerals is the redistribution of rocks, sediments and materials caused by human activities such as mining and construction. The authors also note that natural minerals such as gemstones have been removed from nature and are now instead found in collections all over the world.

What excites Hazen is that there are still many more discoveries to be made. In an earlier paper co-authored with colleagues at Purdue University Calumet and the University of Arizona,2 Hazen used a model to predict that at least 548 carbon-bearing minerals exist on Earth. To date we have only discovered 403 of these minerals and of those ‘missing’ minerals he predicts six to eight are primarily or exclusively human-made. ‘We’re in a new future of crystalline novelty. We expect that to go on for hundreds of years into the future,’ says Hazen.

For Jan Zalasiewicz, a professor of palaeobiology at the University of Leicester, UK, the work will be key in finding and characterising the Anthropocene. ‘The paper combines both detail and precision with rigour and also looks at the very big picture of humans changing the geology of our Earth,’ he says. ‘They have done a very thorough job on the mineral aspects of the Anthropocene. Their research will form a very good context for work that [other researchers are carrying out in this area].’