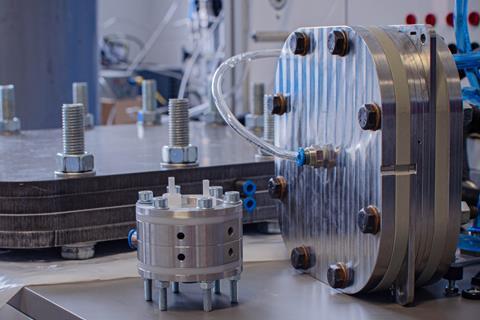 Electrochemical reduction of carbon dioxide is an attractive solution to combat climate change. Now, researchers at the University of Szeged, in Hungary, have discovered an integrated solution to tackle this reaction in continuous flow, overcoming long-term stability problems and enabling a scalable process.

Using electricity to valorise carbon dioxide has fulfilled a dual purpose. It decreases emissions and, at the same time, offers the chemical industry an alternative carbon source to manufacture valuable raw chemicals, such as carbon monoxide, formic acid and methanol. However, several hurdles have blocked the adoption of these technologies. Among other things, it requires a very basic reaction environment, which contributes to the formation of precipitates that affect the stability of the electrolyser and hinder continuous operations.

‘We’ve discovered a new regeneration and activation process that reduces this fade in performance, and allows our electrolysers to operate in a continuous flow for over 200 hours,’ says Csaba Janáky, who led the study. ‘Moreover, our concept will attract the chemical industry. We demonstrated it enhances the lifetime of membrane electrode assemblies and tested its scalability, creating a prototype multicell device that operates at high current densities.’ The team is working with start-up ThalesNanoEnergy on industry applications.

Electrolytic cells for carbon dioxide reduction borrow some concepts and mechanisms from hydrogen fuel cells. In these devices, a membrane separates the two electrodes yet enables the permeation of ions, keeping the reaction running. But this mechanism also led to unwanted side-products. Certain ions, like potassium, travelled through the membrane and towards the cathode, leading to the formation of insoluble salts. ‘Until now, people tried to boost the performance adding increasing amounts of basic electrolytes,’ says Janáky. Unfortunately, this meant feeding more cations to the mix, which eventually led to more undesired precipitates.

While trying to solve this, researchers discovered that basic electrolytes, such as hydroxides, boosted efficiency, but heavily contributed to the formation of precipitates. Potassium, on the other hand, enhanced the reaction – as long as pH was controlled to avoid the accumulation of salts. Then, they created a system that feeds pure water around the anode and infuses potassium solutions to the cathode. Together, this prevents the production of precipitates and enables cells to produce carbon monoxide non-stop without a decrease in performance, explains Janáky. Furthermore, they observed that other alkali ions also activated the electrolytic cells. ‘We used caesium in all our long-term tests, it clearly outperforms potassium,’ he adds.

‘The successful implementation of CO2 reduction technologies requires developments at different levels including the catalyst, operation mode and device,’ says Núria López from the Institute of Chemical Research of Catalonia, Spain. ‘They found a link between all these three elements and managed to stabilise the catalyst with a clever operational technique. Their device is robust and a wonderful example of integrated engineering.’ López hopes that, in future, further mechanistic studies and simulations will help understand the true role of electrolytes in this reaction.