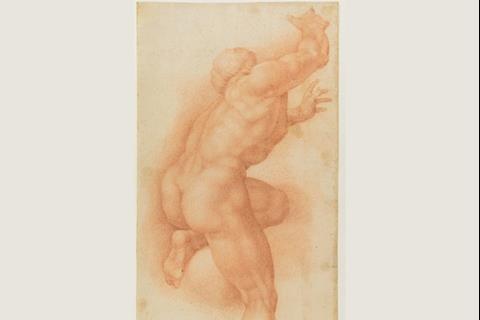 A 16th century drawing from Ascesa dei Beati, a scene of the Giudizio Universale of Michelangelo Buonarroti in the Sistine Chapel. Who drew the image is unknown but an inscription found under a piece of sticky tape used to repair the drawing may shed light on the mystery 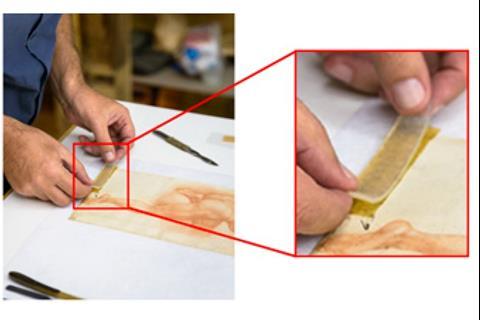 The Italian team applied a microemulsion with five different solvents in it to gently dissolve the glue in the sticky tape. This allowed it to be removed without damaging the drawing 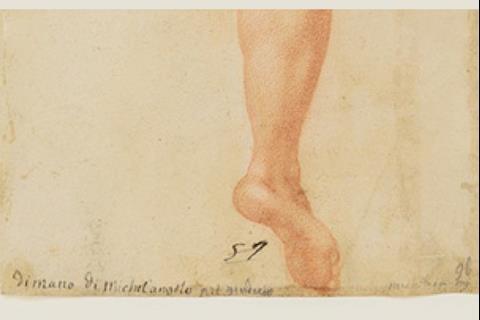 The end result. The safe removal of the tape revealed the message ‘di mano di Michelangelo’ or ‘from Michelangelo’s hand’. The actual provenance of the piece is not confirmed yet though as the inscription may have been put there to boost the value of the drawing. Investigations continue

A hidden inscription on a 16th century drawing suggests that it may have been penned by Renaissance genius Michelangelo. The message was concealed by a piece of sticky tape that was removed using a new technique that gently dissolves the tape’s glue without damaging the surface beneath it.

Adhesive tapes are among the most commonly used quick fixes for damaged items. As well as adorning the tattered corners of Nirvana and Chat Noir posters in countless student halls, tape has found its way onto the Dead Sea scrolls and paintings by world-renowned artists.

But once applied, exasperated restorers invariably run into the same problem: how do you get the tape off again, without damaging the thing it’s stuck to? Ripping or peeling the tape off is likely to take some of the underlying surface with it, and using water or other solvents to dissolve the glue poses obvious risks.

Now, a collaboration of scientists and conservators led by Piero Baglioni from the University of Florence in Italy has developed a hydrogel that can be used to remove sticky tape from pieces of art, without damaging them. The hydrogel encases nanosized droplets of a microemulsion of five different solvents. By applying it onto the tape, the emulsion gradually seeps through and softens the adhesive. The small size of the solvent droplets and the fact that they are confined by the hydrogel reduces the risk of the solvent spreading into the artwork below.

The technique was used to remove tape from a Renaissance-era drawing of a figure that is also painted onto the altar wall of the Sistine Chapel. This exposed an inscription reading ‘di mano di Michelangelo’ (‘from Michelangelo’s hand’) – although the authenticity of this is uncertain, and is now being investigated.