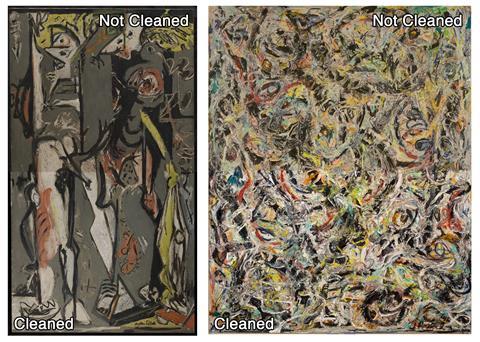 A new sponge-like hydrogel can remove dirt from modern artworks, without damaging them. The material has already been used to clean two masterpieces by US expressionist painter Jackson Pollock.

Microorganisms, atmospheric pollution and poor upkeep can all lead to grime being deposited on paintings’ surfaces. And given the soluble nature of most paints, it’s very difficult to remove these unwanted residues without harming the original artwork.

A team led by the University of Florence’s Piero Baglioni previously created hydrogels encasing nano-sized solvent droplets, which could remove adhesive tapes from paper artworks. However, these materials couldn’t be used on the rough, textured surfaces that are commonly seen in modern paintings by the likes of Vincent van Gogh and Pablo Picasso. Now, the team has developed a new type of gel that can be used to clean up 3D surfaces and has tested it on two paintings held in the Peggy Guggenheim Collection in Venice.

The hydrogel is made of two different poly(vinyl alcohol) networks, which are mixed together through repeated freeze–thaw cycles. The combination of the high- and low-molecular weight polymers creates a sponge-like structure, with interconnected micrometre-scale pores running through the material. This connected porosity enables transport of captured dirt through the whole of the gel’s volume. The small size of the pores ensures that there is no risk of excessive amounts of water spreading into the paint, while the material’s flexibility allows it to mould around any irregularities on textured surfaces.

In a test between these twin-chain polymer gels and traditional cleaning materials, the new materials removed more grime from imitation artworks and restored their original brightness better. Following this initial test, the hydrogel was used to successfully restore two Jackson Pollock masterpieces, Two and Eyes in the Heat. These were made with oil and alkyd paints, both of which are highly solvent sensitive. According to the team, the success of the cleaning efforts represents ‘an important step forward’ for the conservation of cultural heritage and will hopefully enable improved preservation of precious artworks for future generations.