Hydrogel with a basic instinct for drug delivery

A self-assembling hydrogel with nanofibres that specifically capture and release anti-inflammatory compounds has been created for applications in targeted drug delivery. The drug naproxen is only unleashed from the gel in basic solvents, a trait that could be exploited to avoid naproxen’s undesirable side effects. 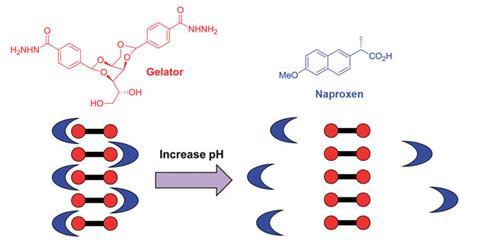 The system has only two components

Painkillers and anti-inflammatory drugs, such as naproxen and ibuprofen, are ubiquitous in the management of many diseases and injuries. However, even these well-established medications can cause stomach ulcers and other gastrointestinal disorders. Side effects most commonly arise when the drugs are taken for an extended period of time, as in the long-term treatment of arthritis with naproxen. One way of preventing these painful consequences is to encapsulate drugs to restrict their availability in certain parts of the body and target their release to others.

The hydrogel, devised by David Smith and coworkers at the University of York, UK, could form the basis of a naproxen formulation that only dispenses the drug under alkaline conditions, such as those found in the small intestine. 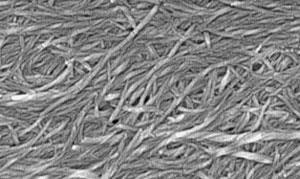 The drug does not inhibit gel assembly

‘Preparing the system is extremely simple,’ says Smith. ‘You mix the gelator and drug in water, treat with ultrasound, heat and then cool to form the gel.’ He adds that ‘the nanoscale structuring of the gel fibres means that they have a large surface area, and can therefore interact with lots of drug – achieving high loading – perfect for pharmaceutical formulation.’

Two strategies can incorporate drugs into this type of gel: physical encapsulation or covalent attachment. In this case, physical encapsulation allows the naproxen molecules to be discharged if they’re deprotonated, as this weakens their specific interactions with the gelator. ‘The drug release mechanism is straightforward and does not involve any covalent chemical modification of the drug itself,’ says Smith, ‘these characteristics have long been valued by the pharmaceutical industry.’

Beatriu Escuder Gil from the Jaume I University in Spain sees potential in the system, having worked extensively in the chemistry of hydrogels and investigated their application in drug delivery. ‘I like that these are two-component gels in which the amount of drug is really well controlled,’ she comments. ‘A stoichiometric amount is bound to the gelator, so you don’t have uncontrolled release.’

The team now need to enhance the system’s stability at low pH and propose that a secondary encapsulation layer would be a viable way of keeping the hydrogel intact in gastric acid.