Cells’ plasma membranes are a fortress protecting it against all sorts – including drugs. But researchers have now come up with a clever way to smuggle drugs across it. They have designed a new type of liposomes featuring connexins, a type of proteins that can dock with cells and create ‘airlocks’ that bypass the membrane. This allows the transportation of small molecules directly into the cell, which could mean lower drug doses for patients and, therefore, fewer side-effects.

The connectosomes were produced by genetically engineered cells

Transport of molecules across cells’ membranes is one of the toughest challenges facing drug developers. Molecules have to be polar enough to be soluble in the blood and the cytosol, but if they’re too soluble they may not be able to bypass lipid bilayers. Encapsulating molecules in vesicles, nanoparticles, or hydrogels can help. However, these strategies can be problematic: triggering the delivery is often complicated and cells tend to quickly expel them.

The team led by Jeanne Stachowiak at the University of Texas at Austin, US, found an elegant solution: using connexins, a type of proteins that cells use to transfer nutrients between one another, to deliver drugs. Connexins are cell doors that are normally closed. However, when a cell docks with another, the ‘airlock’ opens and the exchange of chemical substances can begin. Researchers engineered vesicles with connexins in their membranes dubbed connectosomes. When they plug into a cell, channels open and the drug gets efficiently delivered into the cytosol.

‘To create the connectosomes, we first create genetically engineered cells with overexpressed connexins,’ says Stachowiak. Then they induce cells to produce blebs, or little vesicles, which will have around 10% of their surface covered by connexins. ‘To load the connectosomes we use an excess of calcium, which will trigger the opening of the proteins when they are not docked. Once the drug is inside the vesicles, we can close the channels removing the calcium with EDTA.’ 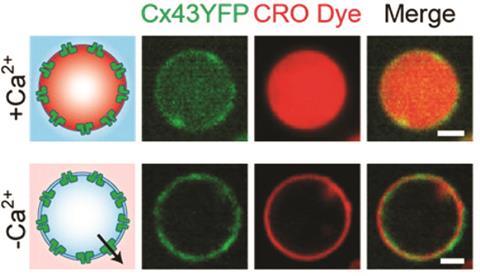 The connectosomes released their cargo – in this case a fluorescent dye – when levels of calcium outside the vesicle fell.

The team tested connectosomes by filling them with the anticancer drug doxorubicin and administering them to a line of tumour cells. The drug entered the cells within hours, whereas it would normally take days to penetrate the membrane. Using connectosomes, the team were able to reduce the therapeutically effective dose of doxorubicin by an order of magnitude.

David Díaz-Díaz, a researcher developing hydrogels for biomedical applications at the University of Regensburg, Germany, sees great potential for connectosomes. ‘This advancement is especially relevant for drugs with poor membrane permeability,’ he says. ‘However, there are still a number of issues that will require attention for further development, like the incorporation of targeting ligands to achieve better cellular selectivity.’

To solve this selectivity problem, Stachowiak and co-workers are already working on a new project ‘where connectosomes will express certain antibodies that could enhance their binding affinity to, for example, tumour cells’. The team is also trying to scale-up the production of connectosomes, and they expect to publish the results of in vivo studies later this year.