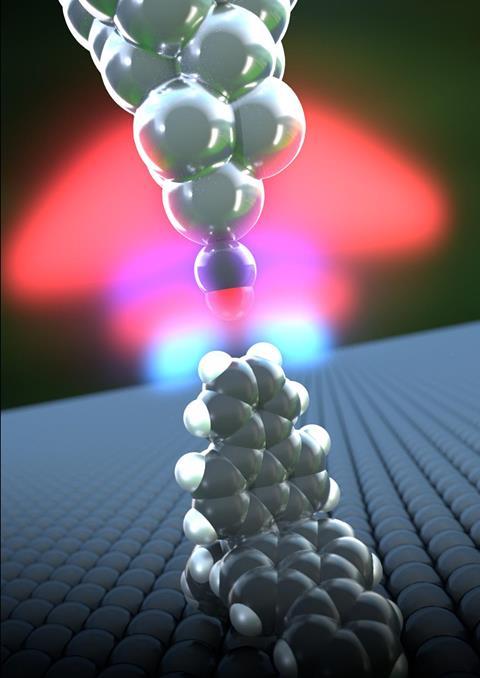 Atomic configuration of the microscope tip interacting with the molecule on the surface. The very weak measured interaction energy is a result of the molecular hydrogens’ interplay with the tip electrostatic potential (negative (red) and positive (blue)).

By demanding molecules ‘stick ‘em up’, researchers have grabbed one of science’s smallest and yet most difficult to attain prizes: ‘seeing’ a hydrogen atom directly. The Europe and Japan-based team pointed two hydrogens at the end of a molecule directly at their atomic force microscope (AFM), like two barrels of a shotgun.

Previous AFM work has shown hydrogen’s role indirectly, explains Adam Foster from Aalto University in Finland. Scientists move the AFM’s probe tip across a surface to map it, measuring the force a carbon monoxide molecule adsorbed to the tip experiences. While this makes AFM highly sensitive, it also mostly detects electrons in the chemical bonds between atoms. Also, the carbon monoxide usually tilts, causing features that can be misinterpreted. Hydrogen atoms may contribute to the resulting images, but scientists haven’t picked them out specifically – until now.

Shigeki Kawai from the National Institute for Materials Science in Ibaraki, Japan, realised the team might be able to isolate the atoms themselves by measuring molecules sitting upright on a surface. His collaborators at Osaka University then made trifluorantheno[3.3.3]propellane (TFAP), which has three straight arms connected at a central point. When TFAP molecules are spread thinly on a silver surface, two arms rest on the surface, so that the third aims its hydrogens directly at the AFM tip.

The AFM images therefore show two bright spots corresponding to hydrogen atoms for each TFAP molecule. At first they appear further apart than calculations predict, but they get closer as the tip gets nearer and the carbon monoxide molecule tilts, eventually becoming one spot.

‘The work supports previous interpretations where tilting can introduce “fake bonds”,’ Foster says. However, there are other pieces of evidence that his team is imaging hydrogen. One is that the oxygen in the carbon monoxide on the tip and the hydrogens on TFAP interact, with a strength that the team measures to equate to a weak hydrogen bond.

The University of Nottingham’s Adam Sweetman highlights the potential offered by molecules with an upright configuration like TFAP, compared with flatter molecules normally studied. Foster, Kawai and their colleagues convincingly show that they detect the force signal arising from hydrogen atoms, he says. However Sweetman adds that ‘interesting questions remain as to how far the signals can be interpreted as arising from hydrogen bonding’.

Foster, meanwhile, wants to look at other molecules in this way, potentially including ones that have biological significance.