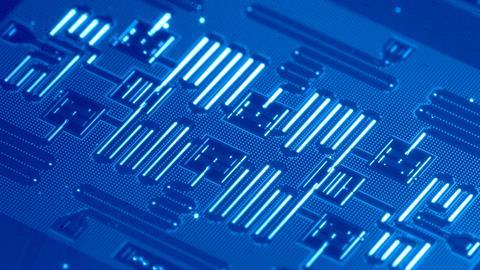 Given caffeine’s much-loved status in modern society, it’s fitting that it’s a benchmark for when quantum computing will overtake conventional computers’ chemical capabilities. For molecules as complex as caffeine, existing modelling approaches are at their limits, explains Chad Edwards, European commercial lead at Cambridge Quantum Computing (CQC) in the UK. The difference arises because regular computers do calculations using bits, switches that can only ever adopt one of two positions, represented by ones and zeroes. Quantum bits, or qubits, can mix these two states in ways that are well suited to describing the complex electronic wavefunctions that determine substances’ chemical properties.

To fully represent caffeine’s behaviour, including quantum mechanical rules affecting its individual particles, might take 160 qubits. Currently US-headquartered computing giant Google’s Bristlecone quantum computer has 72 qubits. It compatriots and rivals IonQ and IBM have computers with 79 and 50 qubits, respectively. Consequently, today ‘noisy intermediate-scale quantum’, or NISQ, computers are unable to match conventional computers’ limited capabilities. But the NISQ era could end abruptly, Edwards believes. ‘Then organisations that haven’t taken quantum seriously early on will ask “how do I make use of quantum computers?”’

Large chemical companies are therefore investing in the technology. One of CQC’s major shareholders, for example, is JSR – a petrochemical and fine chemical company based in Tokyo, Japan. Similarly, German-headquartered chemical giant BASF is an early investor in Cambridge, US-based Zapata Computing. Both CQC and Zapata are specialists in quantum computing software and, along with JSR and many others, are members of IBM’s Q network, giving them access its systems’ capabilities. 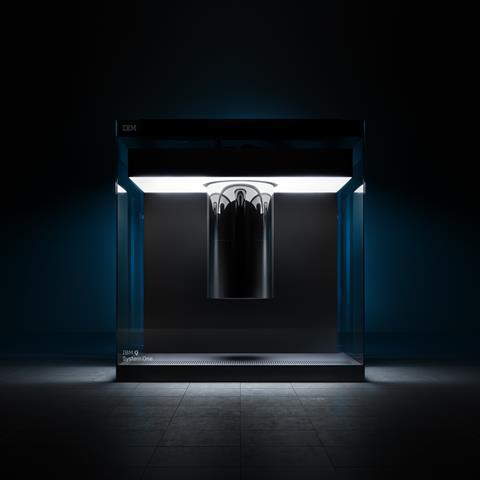 IBM has developed a 50-qubit quantum computer, although it is not yet available for companies to access

JSR’s interest is directly focused on chemistry, according to chief executive Mitsunobu Koshiba. The company ‘develops and uses many photosensitive and active chemistries that use the excited state of molecules’, he explains. Quantum computing would enable JSR ‘to run molecular orbital calculations without using approximations’, he notes. Germany’s Merck KGaA has also committed to a 3-year partnership with German software startup Heisenberg Quantum Simulations to develop and commercialise software for chemical simulations on quantum computers.

For Vijay Swarup, vice president of research and development at Dallas, US-headquartered ExxonMobil, the interest is broader. ‘The scale and complexity of many challenges we face in our business surpass the limits of today’s traditional computers,’ he says. ‘Quantum computing can potentially provide us with capabilities to simulate nature and chemistry that we’ve never had before.’ Consequently ExxonMobil became the first energy company to join IBM’s Q network.

Highly accurate quantum chemistry calculations that ‘enable the discovery of new materials for more efficient carbon capture’ are just one of many attractions for Swarup. ‘Quantum computing can more effectively solve large systems of linear equations to accelerate realistic simulations,’ he adds. Other potential applications he has highlighted include optimising a country’s power grid, more predictive environmental modelling, and finding lower emission sources of energy. ‘While quantum computing is still relatively new and commercial use likely many years away, our expectation is that it can help provide pathways to new technological discoveries,’ Swarup says.

Today’s leading qubit technologies rely on the same maths that describes electron spin, says Kristan Temme from IBM’s T J Watson Research Center in Yorktown Heights, US. Spin is a magnetic property with two values – up or down, equivalent to one and zero. In qubits ‘it ends up being in a superposition, a mixture between those two possible states’, Temme explains. That’s useful in modelling chemistry, as qubit superpositions can represent superpositions of electrons in molecules.

Jungsang Kim, co-founder and chief strategy officer at IonQ explains that superpositions enable correlations between multiple qubits. He describes one possible simple two-qubit example. ‘When the system is measured, both qubits will be found in the zero state, or both will be found in the one state, but never in different states,’ Kim explains. ‘Such fundamental correlation is only allowed in quantum physics – there is no such analogue in our day-to-day, classical world. This fundamental correlation is referred to as an entangled state. In a quantum computer, you can bring two qubits together and create this entanglement using a quantum logic gate, which provides access to a very large computational space.’

IBM embodies its qubits in superconductor devices that look like any other electronic chip, but live just above absolute zero in bulky ‘dilution refrigerators’, or dil-fridges. To prepare qubits to do calculations, it sends conventional electronic signal pulses into the chip. This system has allowed IBM to model beryllium hydride, using six of the seven qubits in an earlier computer.1

The biggest molecule yet modelled is water,2 published by IonQ, which exploits qubits in the form of ions trapped by a chip with a bow-tie shaped raised platform. It holds the ions in a rigid chain above the narrow central portion of the tie, connected so that they would all feel any vibration, explains Stewart Allen, the company’s chief operating officer. ‘We then use lasers to impart precise vibrations in the ions, and when done properly, this will cause the internal spin states of the ions to become entangled,’ he says. 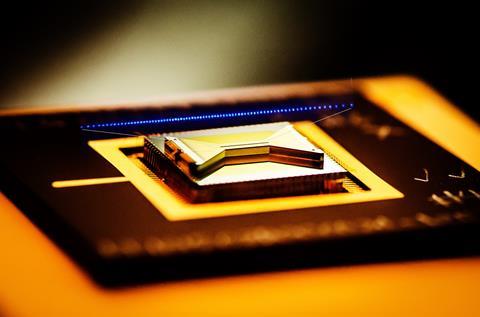 Studying water is a step towards a general method for modelling molecules of any size, Allen says. It shows that such methods have a generic structure, and outlines the size, gate quality and run time a quantum computer needs to solve such problems. It also highlights the importance of quantum computer architecture, logic gate operation and qubit connectedness. ‘Ion quantum computers have the precision necessary to reach meaningful levels of accuracy in predicting the behaviour, more specifically, the reaction dynamics, of molecules in the real world,’ Kim adds.

One limitation comes because superpositions revert to classical bits due to noise, and handling that limitation is at quantum computing’s cutting edge. That’s why IBM, while having a 20 qubit computer commercially available for its partners to use, and having announced a 50 qubit version, also works on smaller systems to understand errors. ‘You really want to be in a regime where you have perfect control over the noise,’ Temme says.

In chemical systems, Christopher Savoie – Zapata Computing’s chief executive officer – recommends a rule of thumb that each qubit can model one electron orbital. Current experiments are therefore arguably equivalent to what a smartphone can do using classical chemical modelling, he says. One issue is that classical computers are free from random errors, but NISQ quantum computers are not. Consequently University of Toronto chemist Alán Aspuru-Guzik invented the error-tolerant variable quantum eigensolver (VQE) algorithm.3 Aspuru-Guzik cofounded Zapata with Savoie, who describes variational algorithms as a classical-quantum hybrid.

VQE starts with a quantum circuit that produces an estimate of a chemical system’s lowest energy state. It feeds the circuit’s output to a classical computer, which processes it and helps suggest a new quantum circuit that might produce a better result. This cycle continues until the algorithm reaches the very lowest energy state. Ultimately this will explore molecules that don’t yet exist, and energy levels of excited states, and therefore how reactions will proceed. Yet in complex systems with many atoms ‘finding those states is very difficult’, Savoie stresses.

Zapata develops ‘technology-agnostic’ software that co-ordinates the two sides of variational algorithms, Savoie explains. That experience echoes IonQ’s findings from modelling water that architecture is very important. ‘We have to look very carefully at whether they’re best performed on a superconducting platform or an ion trap-based platform,’ the executive says. ‘There really is no silver bullet.’ 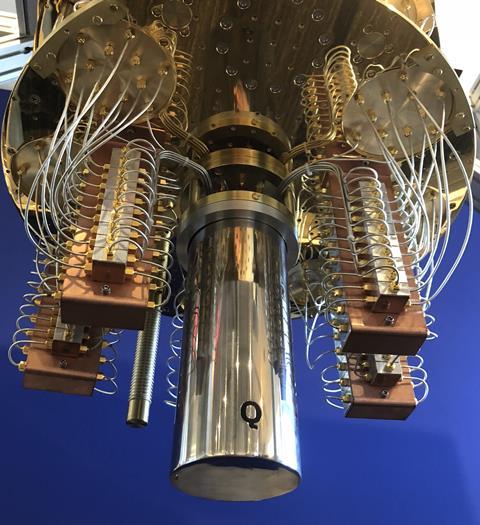 While the VQE algorithm can function in spite of noise, that noise increases a state’s energy value, Temme explains. IBM has therefore developed a method called error mitigation that repeats quantum computing runs to cancel noise. One such run might operate under the best conditions possible, and then later runs would last for longer, exposing them to more noise. ‘Then we recombine those multiple runs and extrapolate to a more accurate estimate,’ Temme says. Using this approach the IBM team repeated earlier simulations of hydrogen and lithium hydride, enabling ‘a really significant improvement’, Temme says.4

But these gateways are tied to each company’s own quantum computing architectures. CQC has been therefore been working closely with chemical, pharmaceutical, and agrochemical companies to develop its Eumen quantum chemistry package. ‘It can be used on whatever the end user wants to use or we deem is the best for that particular problem type,’ Edwards stresses. Eumen interacts with quantum computers through CQC’s proprietary compiler, known as t|ket⟩ and pronounced ticket, a pun on the bra-ket notation used in quantum mechanics.5 CQC has recently expanded t|ket⟩ and Eumen’s capabilities to calculate properties of previously-inaccessible excited state species.

Quantum computers require compilers for two reasons, Edwards explains. They can minimise the number of gates in quantum circuits people design, and map those circuits onto quantum hardware. That mapping requires swapping information between qubits, which might sound simple, but is ‘very, very time intensive’ Edwards says, and calculations often involve thousands of qubit swaps. With noise becoming more problematic the longer a calculation takes, this is an important issue. ‘Our hardware-agnostic compiler optimises the entire process, significantly reducing the overall circuit size,’ Edwards says. ‘This allows you to get the maximal value from the hardware that’s available.’

Edwards stresses that it’s not just giant multinational companies who can familiarise themselves with this technology, because he is leading the UK Quantum Readiness Programme (QRP). CQC and the Networked Quantum Information Technologies (NQIT) Hub at the University of Oxford are trying to ‘educate organisations on the projected implications of quantum computing technologies’ free of charge.

Such hands-on experience is useful, according to JSR’s Koshiba, even though it ‘will take at least five more years’ to address the 1000-atom-plus molecules he’s interested in. ‘It is important to build know-how to understand the optimum combinations of noisy computers and the algorithms and software,’ he says. JSR is working closely with both CQC and IBM on such efforts. However Koshiba warns that quantum computing is suffering from the hype typical of early-stage technologies, and ‘will go through a “quantum winter” within a few years’. ‘It will be sometime around 2023–2025 when the technology will mature for commercial applications,’ he adds.

Yet Savoie stresses that it’s urgent that organisations explore the technology now. If quantum computers double in processing power every two years like classical computers traditionally have, the next doubling will be near the caffeine threshold. ‘There’s no reason to wait,’ he says. ‘The same algorithm is going to run on 300 qubits that is going to run on 100, you’ll just be able to do more. We’re filing patent applications on a weekly basis. It really is an intellectual property “land grab”.’